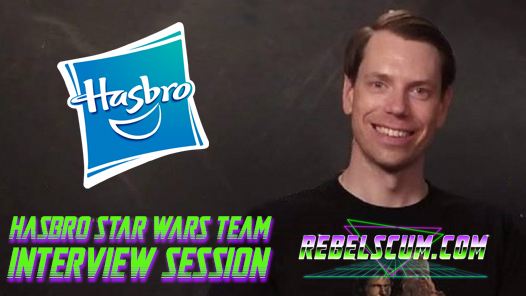 1.) The Vintage Collection Bo Katan has an interchangeable head and helmet. Extra heads are rare for Hasbro. Is this a policy change, a one-off, or will we begin to see this approach moving forward?

Well, in this one in particular, and really in all of our figures we kind of look at them on a case-by-case basis of what's best. And then this one, because her hair is big enough without the helmet on, then in vintage scale to do a helmet over that, it would have had to have been a massive helmet. I mean, we looked at it and did some kind of early explorations on that, and it just didn't do the figure justice to do it that way, so giving the removable helmet and swappable helmet version just made for a better looking figure in general.

2.) Are we likely to see the Black Series figures included in the Target Exclusive Clone Wars Assortment reappear in the main line in regular packaging?

At the moment they're exclusive. That doesn't mean there won't be a version of them in the future, but I don't have an answer for you. The future is a gray space.

3.) It was recently announced that there would be additional quantities of The Vintage Collection Bad Batch 4-Pack made available in early 2022. Is this a special circumstance, or can we hope for popular exclusives to get a second run to meet heavy demand?

No, absolutely. I think we're seeing more and more of this. I know that our fan channel does a lot of re-runs, and I think other retailers with recent announcements are doing this as well. We've said this in other interviews, basically we're all on the same page here. Fans, retailers, and Hasbro. If fans want to buy figures there's no rational reason why anyone would not want that to happen, and so if there's demand out there...that Amazon set did really well. I think it was the number 1 item on Amazon for the day. We put out normal quantities, there was just a lot of demand for it, so yeah absolutely if there's additional demand for something we're going to work to produce more of it because it makes sense for everyone involved.

4.) Are PulseCon items like Trapper Wolf or the individual Cantina Bar sections likely to ever see a wider release?

It's not something we'd rule out, but we like to have some level of exclusivity to those offerings, and sometimes that's like a different set of hands, sometimes that's the physical bar pieces, but there are ways to deal with that in different scenarios, but those two you specifically mentioned, yeah, uh-uh.

5.) Is there a reason The Black Series Tech figure is missing his trademark goggles?

I would say he is not 'missing' them, they're just included as part of his helmet. And I think it's another one of those things, like the Howzer name, where because we're working with Lucasfilm so early on these things, their early animation assets are showing the figure, but they are there without those goggles on as a separate piece. So that's how we developed, that's the data we had at the time, and then as the show comes out we see that those goggles are separate from the helmet. And it was just something that happened where timing with assets and our development cycle to get that figure out close to the time of the show didn't allow that to happen. But if down the road we ever do another version of that character, I would expect that we would do that, and add those in, because yeah it's a distinctive part of him. But it's just part of that early working relationship, and these things kind of coming together at different stages, and having to be so far out in advance on the product to meet timing.
SEND