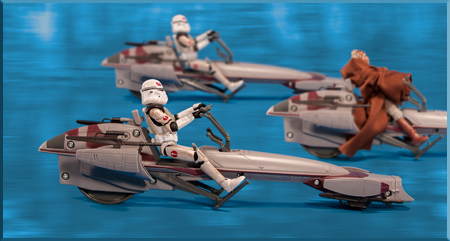 This Clone Commander is leading a speeder bike recon team on Saleucami when he receives Order 66.

The 2011 buck updated Revenge Of The Sith #16 Clone Commander Neyo was released as part of the third wave of figures in Hasbro's 3 3/4-inch Black Series along with the character debut Revenge Of The Sith #15 Merumeru, the much-needed update #17 Vizam, the Sith Lord #18 Darth Plagueis as he is described in the Expanded Universe, and #19 Mace Windu as he appeared in The Clone Wars.

This wave was first revealed to the public in July 2013 as part of the display in Hasbro's booth at Celebration Europe II and began reaching eager collectors the following October.

What's In The Box?
Previous Versions: