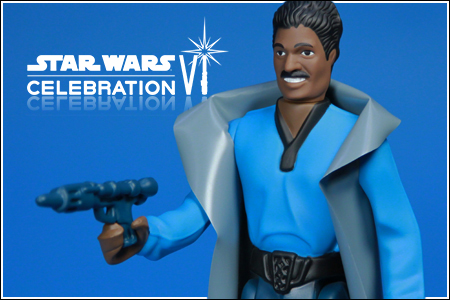 Celebration VI Exclusive Jumbo Kenner Figure
Revealed on the back of the packaging for their 2012 San Diego Comic-Con exclusive Blue Snaggletooth figure, Gentle Giant Ltd.'s Celebration VI exclusive Jumbo Kenner Lando Calrissian was made available for pre-order first to their Premier Guild Members on July 31st, 2012. The figure was available for pick up at their booth at Celebration VI. Like all previously released pieces in the collection, Lando was created using a digital scan of the original Kenner figure from the first wave in The Empire Strikes Back line from 1980 (debuted on the 31 back card). This version of the figure features the painted teeth and eyes the figure originally had. At the time of its release, Gentle Giant has not revealed plans for a second version that matches the later releases of the Kenner figure which did away with the white painted elements.