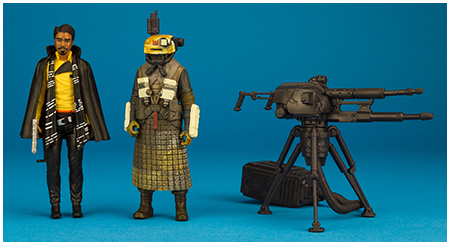 Smooth and sophisticated, Captain Lando Calrissian stands ready to retire from the life of a smuggler and instead become a full-time gambler (or "sportsman", as he calls it), shuffling from card game to card game across the galaxy.

The Kessel Guard & Lando Calrissian featured on this page was released as part of the first assortment of two packs in Hasbro's Solo - Star Wars Universe collection. The assortment also included the Darth Maul & Qui-Gon Jinn and the repacked Rose (First Order Disguise), BB-8, & BB-9E packs. This assortment had a street release set for April 13, 2018 as part of the Solo: A Star Wars Story product roll out, however many retailers disregarded the warnings on the shipping boxes and released their inventory as early as a month before slated release.

Back To Solo - Star Wars Universe