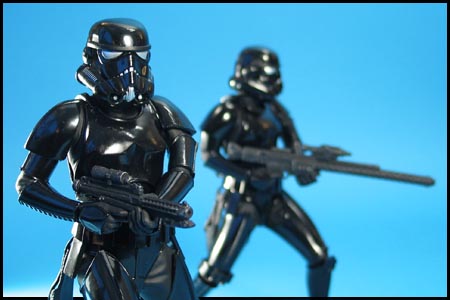 Trading in the shiny white of the regular Stormtroopers, the elite branch of the Imperial military known as the Blackhole Stormtroopers wore the same armor painted black and coated with a special stealth material. Answering directly to the intelligence agent Blackhole, these Stormtroopers undertook especially dangerous assignments and frequently came to the rescue of regular troops.

Kotobukiyas Blackhole Stormtrooper Two Pack ARTFX+ 1/10 Scale Pre-Painted Model Kit may become the jewel of the new series of model kits. With distribution limited to Europe and Asia only, and a production run limited to only 1,500 pieces, this set is going to be tough for any North American collector to find.