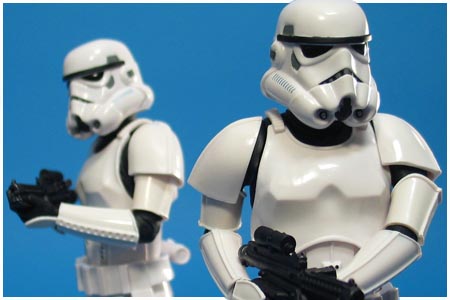 1/10 Scale Pre-Painted Model Kit
Kotobukiya's Stormtrooper Two Pack ARTFX+ 1/10 Scale Pre-Painted Model Kit has done what no other Star Wars collectible has ever done: It has given us too many awesome accessories to possibly use! Thats right, even though it comes with two helmets, two torsos, and two right hands holding stormtrooper blasters, it comes with too many arms and legs to display on the figures at any one time. How many arms and legs? No less than four pairs of legs and six pairs of arms! If that werent enough, it also comes with an alternate rifle holding right hand and two magnetic figure bases! Easily one of the most original and well conceived Star Wars collectibles released in 2011.

Whats In The Box?