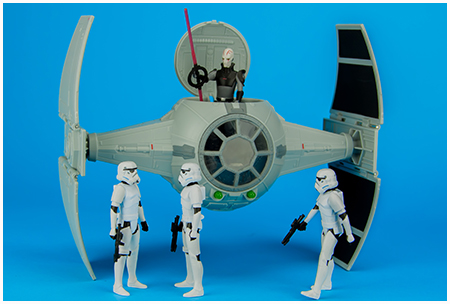 The Inquisitor's TIE Advanced Prototype is equipped with twin laser cannons and provides speed and maneuverability in space chases and battles. The Inquisitor flies this ship to track down Jedi and blasts them with the twi laser cannons if they try to escape.

The Inquisitor's TIE Advanced Prototype vehicle was released as part of the first wave of vehicles in Hasbro's Star Wars: Rebels collection. It, along with the AT-DP (All Terrain Defense Pod) and the Phantom Attack Shuttle were first officially revealed in Hasbro's showroom at the 2014 International Toy Fair and began hitting retail shelves the following October.

Back To Star Wars: Rebels Vehicles