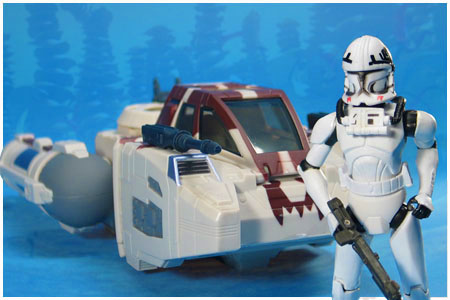 with Clone Trooper Pilot
Among the re-packed Class I vehicles that Hasbro revealed at San Diego Comic-Con in 2011, was a single new vehicle, the Y-Wing Scout Bomber, that seemed to fit perfectly with the ethos of the original mini-rigs from the Kenner collection of the Eighties. Part of waves 2 & 3 for 2011, the other vehicles were Clone Trooper Jesse & BARC Speeder, Obi-Wan & Freeco Speeder and ARF Trooper Boil & AT-RT and these were available from July 2011 onwards.