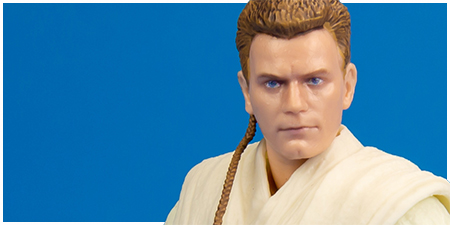 A generation before Star Wars: A New Hope... In a galaxy far, far away, an evil force is gaining strength and threatens an entire civilization. Two courageous Jedi, a young queen, a Gungan outcast, and a slave boy named Anakin band together to save a planet under attack as the fate of the galaxy hangs in the balance.

Jedi apprentice Obi-Wan Kenobi senses a dark presence on the planet of Naboo. Soon, he discovers that the Trade Federation has a nefarious plot in the works and plans to invade the planet. Alongside his master, Qui-Gon Jinn, as well as Queen Padmé Amidala, and the Gungan army, Obi-Wan returns to Naboo to defend against the Federation's attacks. As the invasion of Naboo rages outside, Obi-Wan Kenobi battles the evil Sith Lord, Darth Maul, in a fierce lightsaber duel. Darth Maul is an accomplished warrior, but Obi-Wan is guided by the Force and a deep bond with his Master. The red and blue lightsaber blades clash in a battle that could change the galaxy forever!

The Black Series Obi-Wan Kenobi (Jedi Duel) action figure featured on this page is a sculpt debut, and was officially revealed at 2019 New York Toy Fair during Hasbro's Entertainment Brand Preview Event. The figure features retro-styled packaging in a tribute to Hasbro's 1999 Episode One assortment. Obi-Wan and his Duel Of The Fates counterpart, Darth Maul were available as Star Wars Celebration Chicago 2019 exclusives. Additionally, both figures were available for an extremely brief period of time on HasbroPulse.com on May 4th, 2019. Obi-Wan Kenobi was set for mass retail in The Black Series packaging later the same year.

Text by B. Acree