Pimp My Ride: 75244 Tantive IV
Posted by Jeremy on February 21, 2020 at 09:16 PM CST
When you or I build with LEGO we invariably begin with a big pile of random bricks, our imagination and a whole lot of expectation, whereas the team at LEGO take a much more structured approach.

So, when it comes to devising a LEGO set, whether it's an all-new creation or a re-imagining, the Star Wars team in Billund start from scratch every time, bringing in a designer who hasn't worked on the model before. Taking into account new elements and building methods which LEGO has developed, using as much original source material as possible and, with the option to collaborate with other designers at LEGO, the model goes through a number concepts before it is submitted for stakeholder approval and eventually makes its way through the production process.

At the end of all that effort is a set that fans half love/half want to make their own. And that's something every LEGO designer knows and accepts because there's no right or wrong way to build with LEGO bricks.

When the latest version of the Tantive IV (75244) was announced at Star Wars Celebration 2019 in Chicago - and retail arrival on May 3rd, 2019 - with its attention to detail and mantle piece-vibe, many members of the LEGO community were surprised that it wasn't a member of the Ultimate Collector Series family. 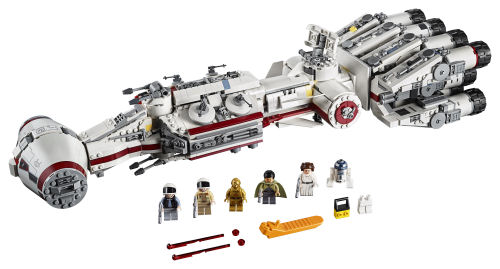 (That it didn't even get membership to the Master Builder Series, the oddly titled one hit wonder of a sub-theme that was made up entirely of 75222 Betrayal at Cloud City, even confused the casual fan.)

According to Jens Kronvold Frederiksen, the big giant head of the LEGO Star Wars team, the requirement for an Utimate Collectors Series set is "a display model on a stand with a data label."

Without a doubt the 75244 Tantive IV is instantly identifiable as a highly displayable set, and that ticks the first box. It is the criteria that follows that this set doesn't reach the standard of.

Taking the matter into their own hands fans decided that it was time to pimp their ride with a few adjustments. Nowadays a customised set is known as a My Own Creation - a term that stems from a proto-LEGO Ideas theme that ran in the late 1990s/early 2000s and featured sets designed by fans - and it's a big part of the LEGO community. While MOCing may seem a modern evolution of LEGO building, it isn't - it's the root of all LEGO and the rest of the world still calls it play.

Thankfully upgrading the Tantive IV to resemble an Ultimate Collector Series set is relatively easy thanks to modding sites like Rebrickable and third party companies who can add the extra details that make the set come alive.

The first, and easiest, modification is to build a stand for the model and there are a number of options to chose from. One of the most popular is by Tobias BrickBob" Nieder who designed his own in order to remedy its lack of UCS credentials. 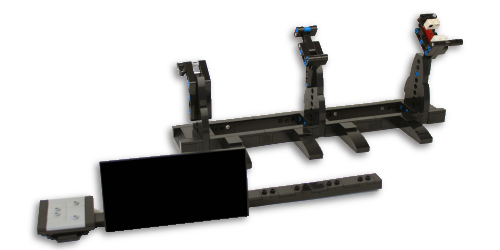 Favouring displaying his LEGO sets over playing with them he opted to design his stand to allow the model to present as much detail as possible, to give it a dynamic pose and allow the minifigures to be on show.

"When I finished the tantive, and was designing the stand for the plaquette I thought of the tantive in an angle.

I'm the museum-type of collector, so I wanted to present my sets in a proper way. The problem is, when the sets are placed on a high shelf, one can only see the side of the model. With a stand with an nice angle, one can see more of the model. With the stand, I can enjoy the details of the top and the side view.

The idea of the small homage to the scene when R2-D2 received the data from Leia came by thoughting of a cool feature for the stand."

The result of all his time and effort, which you can find instructions and an inventory for on Rebrickable.com, is completed with a data plate printed on diecut vinyl by the cleverly named Ultimate Collector Stickers, who have an extensive range of adhesive-back decorations for official and popular custom sets. 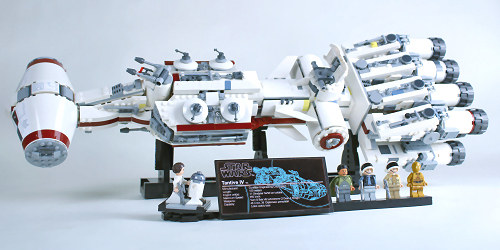 Asked what other modifications he would like to do to the Tantive IV set, Tobias expressed reservations about the design of the cockpit.

"The solution with the four cones is smooth, but not very challenging and then there are the stickers. I would had prefered a solution like the first tantive LEGO released with the wedge shaped parts. So this maybe an option for a good modification."

This sentiment is shard by a number of other customisers, including Eurobricks user Markus "MAG85" Gruenert whose list of amendments includes a complete overhaul of the hammerhead shark-like nose cones of Princess Leia's consular ship that uses different colours and textures to avoid stickers and a fully refurbished cockpit which only lacks for the Special Edition amendments that ILM-modeller John Goodson included when he was tasked with restoring the original model. 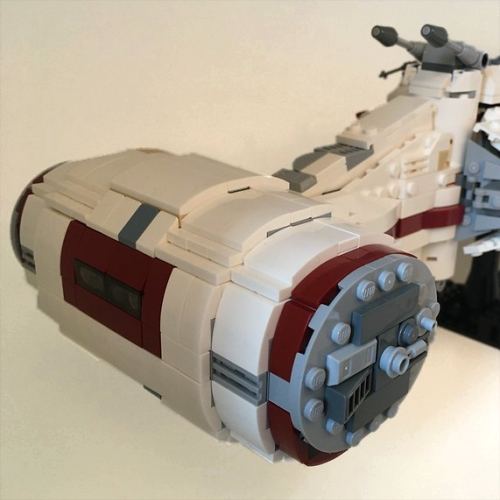 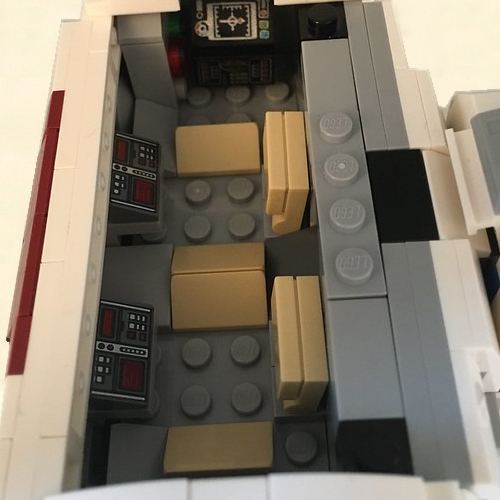 Recognising the skill displayed by the set's original designers at LEGO, Markus admits that Its difficult to build a cone shape with bricks in this little dimensions." While other builders have opted for a more complicated re-build that is more akin to 10019 UCS Rebel Blockade Runner his desire to be able to seat a command crew of two minifigures in it dictated the end result.

Modifying a set using parts from your spare LEGO brick bucket isn't the only way you can personalise a set.

Growing in popularity is the addition of specialty light kits. What started as a couple of entrepreneurial engineers making bespoke lighting sets for a niche group of customers has grown into a competitive industry that creates off-the-self kits for specific sets.

So lucrative is the market that LEGO has taken tentative steps towards getting a foothold. Their opening foray - the noirely named Night Mode - was debuted at LEGO World in Copenhagen last week and featured five sets with concept lighting, developed through the LEGO Lead User incubator programme. LEGO was quick to make it clear that these were only on display to gauge fan reaction and weren't indicative of the final product.

Serendipitously, Light My Brick - one of the companies LEGO paired with to advise in the development of their illuminating prototype - has a 75244 Tantive IV light kit that is ready to ship. 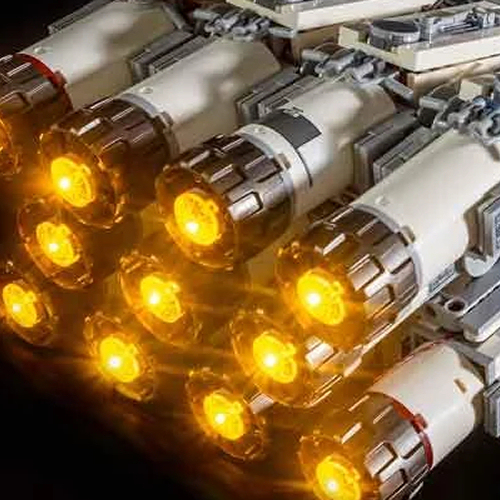 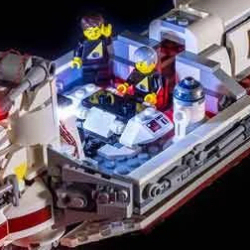 Consisting of 26 individual lights that give the eleven engines their distinctive glow, a flickering blaster effect for the dorsal cannon as well as running and interior lighting, the kit is well worth the US$114.99 (plus postage) outlay. No special knowledge is needed as all the wires and connectors are plug and play, and the instructions are easy to follow, making the entire installation process a breeze.

Whether you are newly into LEGO Star Wars and exploring the community or have been collecting for a while and are looking for inspiration to spruce up your displays, at the end of the day it is your LEGO to do as with you wish - even if it involves using "illegal techniques", cutting, painting or adding custom parts. Just remember - no Kragle! 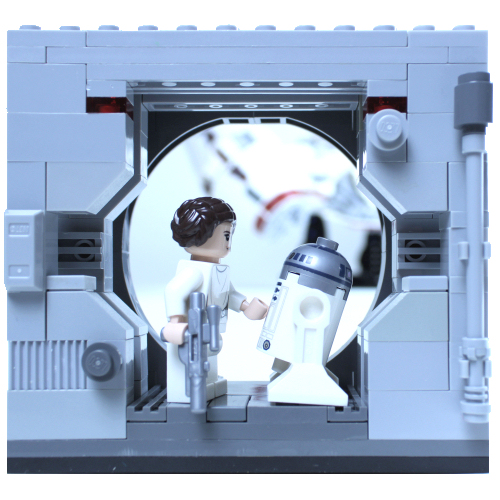