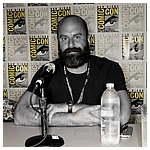 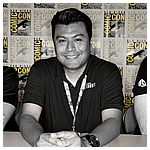 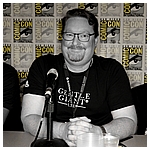 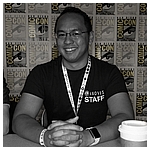 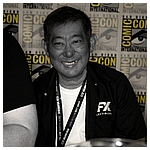 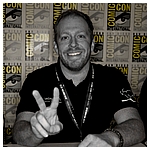 Nixon began the session by explaining how they strive to capture character details in their watches. They showed us the Swiss made Boba Fett special edition of 100 watch. It comes in a case and sits in a sarlacc pit within the case. It includes such details as Boba's blaster as the second hand. Retail is about $2500. There is a digital version that sells for $150 and included such fun detail as Han Solo in carbonite on the wristband.

The Darth Vader watch draws a kit if éléments from his costume. For example, you can see his face mask vents on the clock face, The dial is a hyperbolic chamber and the box is also his meditation chamber.

Sideshow relayed to us that they are always looking for scenes in the movies that capture the essence of a particular character and freeze the facial expression. Sideshow showed us some new statues including a new stormtrooper with a fabric suit and a prototype Princess Leia. Next we got a look at some upcoming life-size units including the Return of the Jedi version of Boba Fett and a stormtrooper. Both feature new bases, as will the entire line. Lastly, Sideshow announced the return to the mythos line and showed us an Obi-Wan Kenobi from prior to A New Hope. The piece included elements from his time in the Clone Wars and wandering around Tatooine.

Nothing new other than a review of previously announced upcoming products including the unpainted prototype of Jedi Luke Skywalker. They announced they will have products from The Last Jedi but could not show anything.

Gentle Giant showed off the convention exclusives once again. Then they wowed us with the new Jumbo line characters including Luke Skywalker in Stormtrooper Disguise from the Power of the Force line and the Emperor's Royal Guard. Lastly, they showed the jumbo early bird kit, which feature the full cardboard backdrop, stickers, and mailaway card.

EFX lets us know that they obtained the rights to support the new films. They also announced that they will be picking up products from the Prop Shop license and are beginning work on the burnt Darth Vader helmet.

Tamashii Nations, short on time, quickly showcased some of their products and discussed what was next. They told us about how the lead designer loves creatures and had a fisherman father.. This lead to the reveal of the Admiral Ackbar movie realization.

Bandai told us about their time at Skywalker Ranch and how they got to research the A New Hope Millenium Falcon. They took over 3800 photos of models from the archives and determined about 38 percent of the production models used parts from old Bandai models. Bandai was able to track down these kits and make other parts to make an extremely accurate reproduction of the Millenium Falcon.

The big reveal from ANOVOS was the definitive mandalorian jet pack kit. This was made from reach in the Lucasfilm archives and features all the parts you would need to make a Boba Fett jet pack from any movie and a Jango Fett jet pack. You could also make whatever you decided. ANOVOS said this will be the last jet pack you ever buy. Unlike other jet pack models this one has the actual mechanism inside captured from the archives and is visible to you.
SEND