BBTS News: G.I. Joe, DC Multiverse, RoboCop, Transformers, WWE, Godzilla, figma, Acid Rain & More!
Posted by Joey on December 1, 2021 at 08:03 PM CST
--------------
NEW PRE-ORDERS
--------------
Two new figures have joined the Classified Series with Cobra B.A.T. and Alley Viper. Each figure features premium deco and details, incredible articulation and a plethora of accessories. The DC Multiverse series gets four new figures from the Gotham Knights video game with Red Hood, Nightwing, Batgirl and Robin! Part man. Part machine. All cop. For the 35th anniversary of the cult classic movie RoboCop in 2022, the crime fighter from future Detroit gets the Ultimate treatment from NECA! From Star Wars: The Clone Wars comes a new statue of Jedi Master Obi-Wan Kenobi! He is featured on a translucent base with his lightsaber ignited and ready for battle. Join in the WWE action with these Elite Collection figures from Mattel! This series features WWEs biggest personalities and champions as bold and colorful figures, ready to wreak havoc right out of the box! Celebrate your love of Pokemon with this Charizard statue! He sits atop a fiery base sculpted with translucent material. From the anime series Jujutsu Kaisen comes a figma action figure of Yuji Itadori! He is highly articulated for an endless variety of poses. The premium quality, highly accurate Pokemon Premier Ball replica is made with an engineered metal shell, has a deeply colored surface that is sensitive to touch and proximity and features a brightly illuminated button and lift-to-display illuminated presentation case. 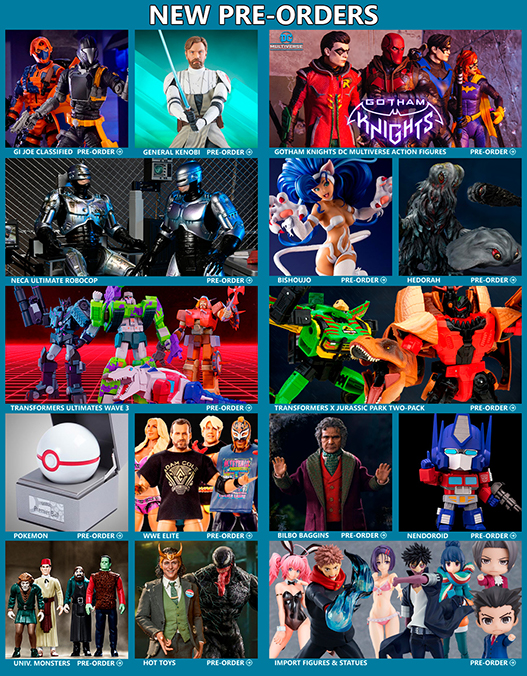 ------------
NEW ARRIVALS
------------
The Studio Series 86-10 Voyager Class Transformers: The Movie-inspired Decepticon Sweep figure converts from robot to Cybertronian hovercraft modes in 19 steps. Goku is back in stock with the A Saiyan Raised On Earth version of his S.H.Figuarts figure! The bounty hunter known as the Mandalorian and the Child he protects, Grogu, join the ArtFX statue series! Train R2-D2 to master various skills with STAR WARS R2-D2 TAMAGOTCHI. Take care of R2-D2 by keeping him charged and clean and by playing two mini-games (firefighting and Dejarik holochess). Storm Collectibles' figure of Kung Lao is based on his appearance in Mortal Kombat 2 and will include two swap out portraits, multiple interchangeable hands, a removable hat, a hat with a slash effect, a blood effect piece, and the Rabbit from his Friendship. Super Galaxy Gurren Lagann joins the Plaiobot model kit line! The head and chest are pre-painted, plus the five molded colors means all you have to do is assemble to get a complete, highly poseable and detailed figure! Any fans of the Gremlins movies knows the rules: keep them out of sunlight, don't get them wet, and never feed them after midnight. Follow them and you'll have a cute and friendly little Mogwai, like this deluxe 7-inch scale Gizmo. 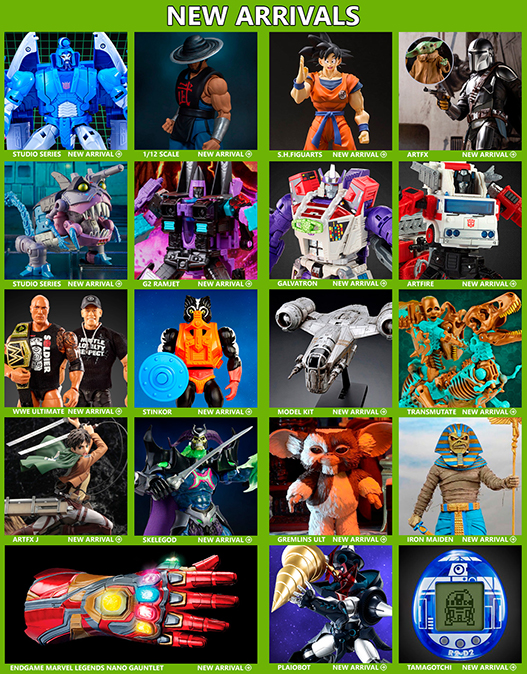