BBTS News: Halloween, SilverHawks, Star Wars, G.I. Joe, Cosmic Legions, TMNT, Marvel Legends, MAFEX, DC Multiverse, Transformers & More!
Posted by Joey on October 27, 2021 at 03:04 PM CST
--------------
NEW PRE-ORDERS
--------------
The balance between the crime-fighting SilverHawks and Mon*Star & his mobsters has the Limbo Galaxy on a razors edge, and Super7s newest wave of SilverHawks ULTIMATES! may just tip the scales of power! Grab the latest Star Wars: The Vintage Collection Death Watch Mandalorian and Ahsoka Tano from the hit show The Mandalorian! Michael Myers from Halloween II stabs and slashes his way into the One:12 Collective! New G.I. Joes are up with Croc Master & Fiona, Storm Shadow and Spirit Iron-Knife. She-Spawn and Cy-Gor join the action figures of Spawn's Universe from McFarlane Toys. Four Horsemen's latest line, Cosmic Legions, has plenty of figures to choose from along with accessories! The first wave of DC Multiverse figures from Batman: The Dark Knight Returns has Superman, The Joker, Batman and Robin! Imagine yourself as one of the Banished or Covenant and get ready to battle the UNSC! This Nerf dart blaster recreates the blaster's distinctive design with flexible needles that light up when you grip the handle! 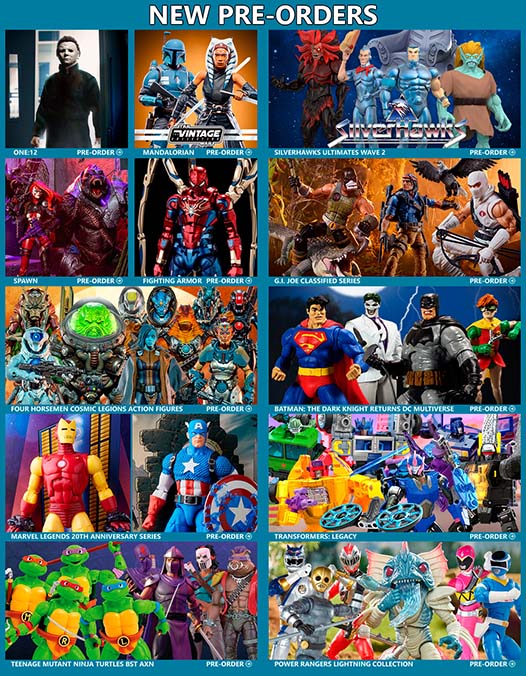 ------------
NEW ARRIVALS
------------
Batman Earth -32 (Dawnbreaker) & Green Lantern are here with a two-pack from Dark Nights: Metal! The latest arrival from McFarlane Toys series of Warhammer 40k figures is the Adepta Sororitas Battle Sister (The Order of the Bloody Rose Ver.). Marvel fans can pick up all the latest Eternals Marvel Legends action figure as seen in the new film. Two waves of The Lord of the Rings Select Series figures are here with the Aragorn & Orc set and Frodo & Nazgul set. It's the attack of the Iron Giant! This all-new action figure showcases the dark side of the Iron Giant and features gun hands, undented angry head and light-up eyes! The Scarlet Witch, known as Wanda, joins the Marvel Select action figure line based on her appearance in the WandaVision Disney+ series! Known as kiande amedha, or hard meat to Yautja, this Xenomorph is known to humans as the Alien Warrior. This drone-caste Xenomorph returns to the classic bipedal pose, evoking the style of the 1979 Big Chap while adding updated screen-accurate details. This 1:18 scale figure comes with 2 sets of hands and a pegged stand for maximum poseability. 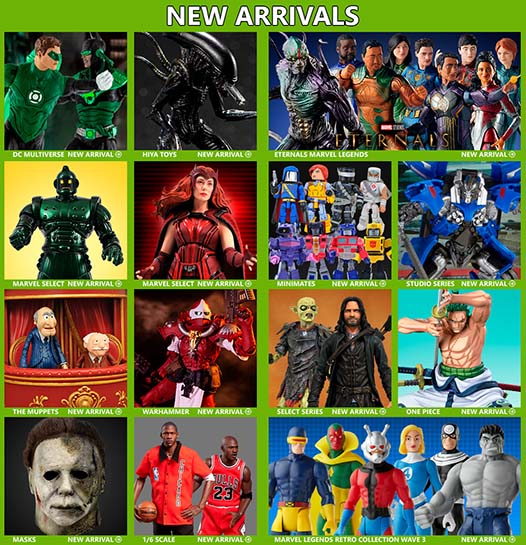