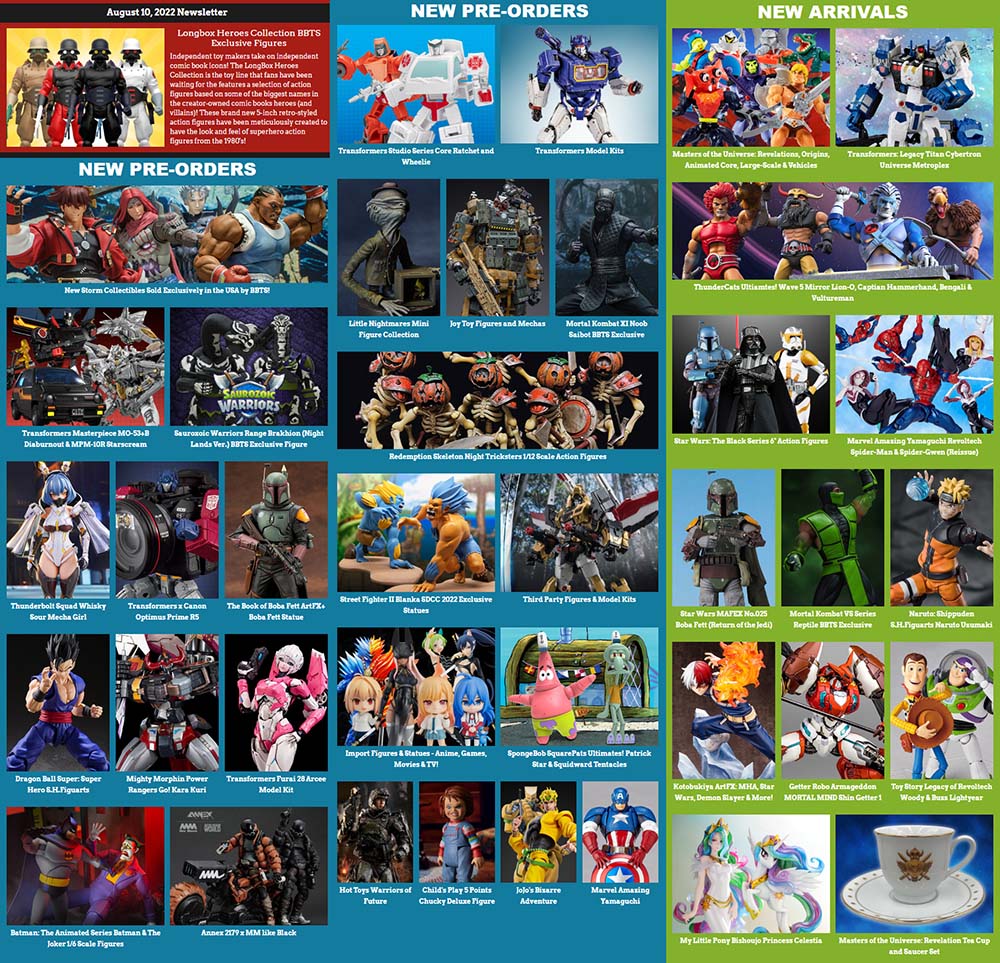 --------------
NEW PRE-ORDERS
--------------
Independent toy makers take on independent comic book icons! The LongBox Heroes Collection is the toy line that fans have been waiting for and features a selection of action figures based on some of the biggest names in creator-owned comic books heroes (and villains)! BBTS has teamed up with Storm Collectibles to bring you figures sold exclusively in the USA by us! Diaburnout and Starscream have joined the Masterpiece line from Takara Tomy and Hasbro! Another BBTS Exclusive has appeared, this time it is the Saurozoic Warriors Range Brakhion  headed straight for the Night Lands! From AniMester comes this 1/9 scale figure of the original character Whisky Sour! Are you ready for your close-up!?  We are with the Transformers x Canon Optimus Prime R5! The protagonist from the popular Star Wars live action series, The Book of Boba Fett, Boba Fett is joining the ARTFX+ series! Ultimate Gohan from Dragon Ball Super: Super Hero is back from the S.H.Figuarts brand! Flame Toys presents a new series line called Go! Kuro Kara Combine, and the 1st project is Dino Megazord! Arcee joins the Furai model kit line! Straight from the screen comes the newly released Batman: The Animated Series 1/6 Scale Batman & The Joker! The world of Annex 2179 continues with the Annex 2179 x MM like Black! Core Class figures are 3.5-inch collectible action figures that allow fans to collect mini versions of iconic characters inspired by epic scenes from the Transformers movie universe, now including The Transformers: The Movie! Build your own Transformer with a Transformers model kit! THE JANITOR, a blind man who tries to hunt Six using his keen sense of hearing is recreated as a palm-sized figure! Joy Toys latest release is Battle for the Stars FEAR VI (Heavy Assault) with Pilot 1/18 Scale Figure Set! Noobs origins are unknown, but we are not hiding the fact that BBTS is selling him exclusively in the USA! From Ghost Rabbits Redemption Skeleton line comes the Night Tricksters! Icon Heroes presents the Street Fighter Blanka Hyper Fighting Polystone Statue! Check out the lates released of Third Party Figures & Model Kits! Characters from Falslander, Dragon Quest, My Dress-Up Darling, Warau Ars Notoria & more of your favorite brands have joined series like figma, Nendoroid & Pop Up Parade! They are the alpha and omega of the Bikini Bottom intellectual spectrum, so whether you gravitate toward a sophisticate who dabbles in the arts, or a simpleton who babbles about bubbles, Super7 is proud to welcome Squidward and Patrick to the SpongeBob SquarePants ULTIMATES! Prior to the official release of the Warriors of Future, Hot Toys is excited to unveil Commander Johnson as Sixth Scale Johnson collectible figure to prepare fans for the attacks from Pandora! The Mezco Toyz Chucky Deluxe figure set comes with all the parts and pieces you need to create your favorite version of the Lakeshore Strangler! Dio and The World have joined the supersized line of Super Action Statue figures, BIG! Captain America emerges once again as a Marvel Amazing Yamaguchi figure!

------------
NEW ARRIVALS
------------
Plenty of MOTU figures from Mattel have arrived! Harness the power of Energon with the in-stock Transformers Legacy Series Titan Cybertron Universe Metroplex robot toy! The Wave 5 Ultimates! ThunderCats have arrived from Super7! Star Wars: The Black Series has figures like Darth Vader, Death Watch Mandalorian & more in stock! Your favorite arachnid crime-fighters swing into the new arrivals: Spider-Man and Spider-Gwen! The most dangerous bounty hunter in the galaxy is in stock as a MAFEX figure from Medicom Toy! Reptile is the last known surviving member of his race  but there are plenty Reptile BBTS Exclusive Figures in stock! The S.H.Figuarts Naruto Uzumaki is here! Characters from MHA, Star Wars, Demon Slayer & more are featured as ArtFX statues from Kotobukiya  now in stock! From CCS Toys comes a nearly 10-inch tall figure of Shin Getter 1 from Getter Robo Armageddon  check it out on the New Arrivals page! From Snakes in boots to infinity and beyond  the Revoltech Woody and Buzz Lightyear are in stock! The most magical pony, Princess Celestia, has arrived from Kotobukiya as a Bishoujo figure! Take a sip from the in-stock Masters of the Universe: Revelation Tea Cup and Saucer Set!
SEND