BBTS Sponsor News: DC Multiverse, Transformers, Mortal Kombat, MOTU, Halloween, Godzilla, Alien, Anime & More!
Posted by Philip on April 21, 2021 at 01:58 PM CST
--------------
NEW PRE-ORDERS
--------------
Following the universe-shattering events of Dark Nights: Metal, the Earth is enveloped by the Dark Multiverse and has transformed into a hellish landscape twisted beyond recognition. McFarlane has 4 new figures with a Collect to Build Dark Father figure. Also from McFarlane, two new Mortal Kombat figures are available with Noob Saibot and Kabal. This Optimus Prime figure is the first to use Yoloparks Internal Interconnect Endoskeleton System (IIES) that, unlike traditional ratchet joints, utilizes a real Mechanical Gear System for smooth movement. This amazing figure has a total of 333 points of articulation and is limited to 2,000 pieces. This Ultimate Michael Myers figure is based on his appearance in the new Halloween Kills movie and stands over 7" tall. Super Galaxy Gurren Lagann joins the Plaiobot model kit line! From the fan-favorite action manga Fist of the North Star comes the elder brother of Kenshiro, Jagi! Help Bill and Ted Pass their history class and avoid military school! Travel through time with these two most excellent figures. 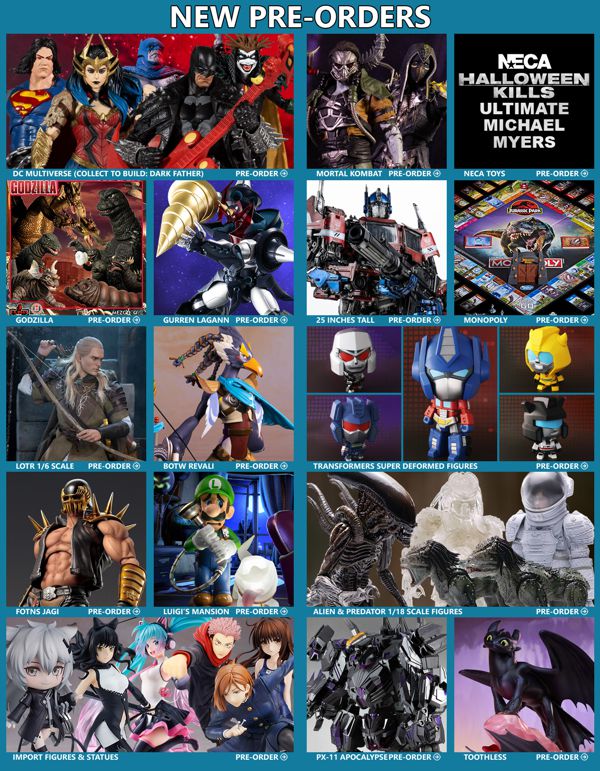 ------------
NEW ARRIVALS
------------
Masters of the Universe ReAction figures are back in stock with some new additions including exclusives and variants! McFarlane's 12 inch tall static Commando Spawn figure has arrived! Dani Moonstar was part of a group of superhuman young mutants and has the power to conjure illusions based on her enemy's deepest fears. Now she is part of the Marvel Legends action figure series! How is anyone supposed to relax with a bunch of ghosts running around? Now you can with this official Ghostbusters Trap Incense Burner, modeled after the iconic ghost trap seen in the films! With the Ultimates New Japan Pro-Wrestling figure from Super7, you can relive the fun and excitement with these legendary wrestling action figures. Mondo makes collectible creature history with the (possibly?) first-ever Creature from the Black Lagoon 1/6 scale figure! This Amazing Yamaguchi Wolverine action figure includes several interchangeable parts including facial expressions, hands, and claws. 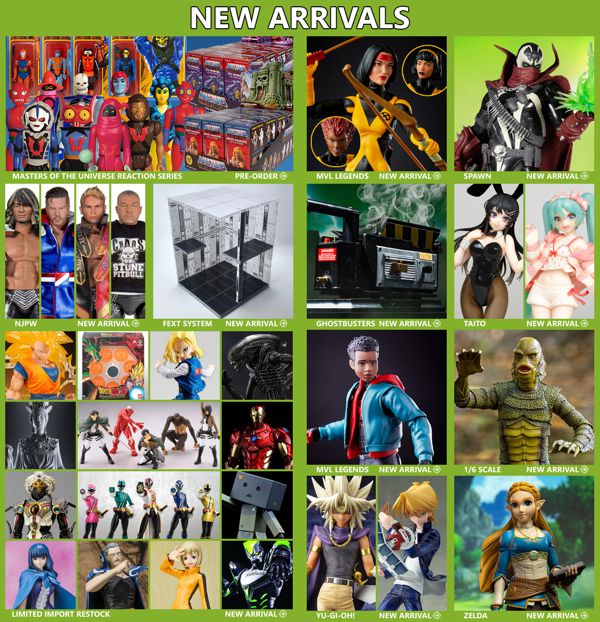