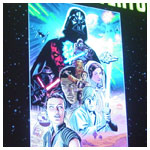 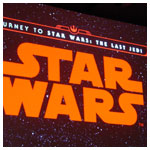 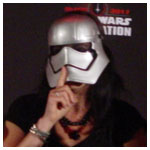 Celebration Orlando 2017: Lucasfilm Publishing Panel
Posted by Jay on April 15, 2017 at 07:40 AM CST
Billed as the "Lucasfilm Publishing Writers Roundtable" on April 14, 2017, from 4:30-5:30 PM, on the Behind-The-Scenes Stage at Star Wars Celebration Orlando, the panel started out as a writer's workshop to discuss fan questions sent in via Twitter.

Partway through the presentation Timothy Zahn departed to be replaced with Christopher Ellis, an editor from IDW Publishing to discuss their comics that are created by them, including the Micro-Comic packs, the Artists' Editions, and the Newspaper Strip reprints. He then announced a new, all-ages comics called Star Wars Adventures, that would be published by IDW soon.

Then they announcements came fast and furious. They showed off covers for the new Forces of Destiny titles from Disney Publishing, which are books for younger readers, and feature 3 stories in 1 book. The first two volumes focus on the women of the Star Wars saga including Sabine, Rey, Padmé, Leia, Ashoka and Jyn.

They also discussed the previously announced titles including: Rebel Rising (Beth Revis), Guardians of the Whills (Greg Rucka), and The Rise of a Hero (Louise and Walter Simonson), the first title in the Star Wars 40th branded line of books.

Michael Siglain then revealed the newest Little Golden Book, I Am A Hero, and the oddly-titled, 99 Stormtroopers Join The Empire, as well as Ben Acker and Ben Blacker's newest Join the Resistance title, Escape from Vodran.

There were pictures of covers for Star Wars Coding Projects from DK, the new look of Star Wars Insider, becker&mayer!'s On The Front Lines, Chronicle's Star Wars Super Graphics, and Disney Press's BB-8 On The Run (Drew Daywalt and Matt Myers) which will tell the tale of the droid between leaving Poe and joining up with Rey.

Star Wars Reads Day was announced but instead of a day, or a week in October, it will be the entire month!

Then, the fans got what they came for, with the announcement of the branded storyline, The Journey to The Last Jedi. Delilah Dawson was asked if she had an a announcement, and she put a Captain Phasma mask on to the delight of the crowd! Her book, Phasma, will be part of the "Journey to" storyline, and come from Del Rey starting in September.

Other titles announced but not discussed include: