Getting Inside I Am C-3PO
Posted by Adam on January 14, 2020 at 08:13 PM CST
As morbid as it sounds, with the passing of a number of the original cast and crew in the last handful of years it's likely that a sense of mortality is starting to creep up on many of those who have worked on Star Wars over the last four decades, and the realisation that it's time to share some stories before it is too late is starting to hit home.

With the roll-call of Star Wars actors, filmmakers and staff who have worked on Star Wars in the literal thousands there's only one person who has completed a full lap of the block, and that's Anthony Daniels. His tour of duty has outlasted even The Maker himself, and has seen co-stars, directors and producers come and go - and with the closing of the Skywalker Saga, he has chosen to share his experience.

"Now, for the very first time, Anthony Daniels will tell C-3POs story in its entirety, from seeing the first concept images to the early stages of the final film in the Skywalker saga, Star Wars: Episode IX, and in the process, will also tell his own. This includes his encounters with movie legends such as Sir Alec Guinness, what it was like working closely with George Lucas, and the friendships he formed with Mark Hamill, Harrison Ford, Carrie Fisher, and others. But being encased in a solid shell for countless hours also involved hardships, pain, and in some cases real physical danger."

What "I Am C-3PO: The Inside Story" is is a behind-the-scenes memoir that accounts for the vast proportion of his fulfilment as one of the chief storytellers of Star Wars galaxy; chronicling his participation in all nine movies, the in-between bits that most fans would glaze over and a fair few personal reflections about how his time inside the costume of See-Threepio was less than fulfilling.

If what you are hoping for is an inside scoop on Daniels's life, from start to finish, then this isn't the book you're expecting because right from the start he admits that everything that leads to him getting the role of C-3PO is largely unimportant. Likewise, if you are expecting a tell-all that lays all the goings-on and shenanigans of the Star Wars cast and crew to bare you're going to be disappointed because Daniels proves that his real-life persona is a far stretch from his gossipy alter-ego. 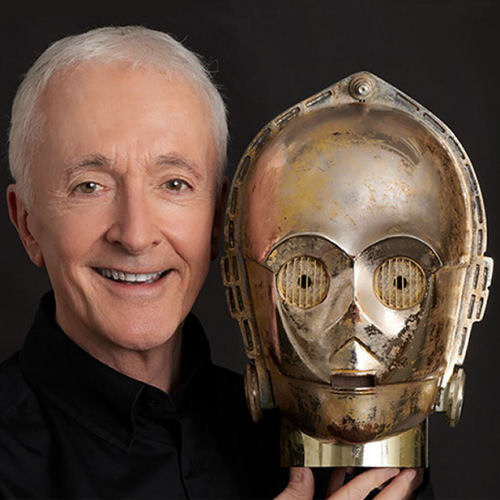 Tactfully skirting around his personal and professional relationships with quite a few of the personalities he has worked with, Daniels shares a selection of cherry-picked, and largely unvarnished anecdotes that will be enlightening to old and new fans and provide a fresh look at the inner workings of history's most successful movie franchise.

As with most autobiographies, the true story lies between the lines and those readers who need to use most of the digits on one hand to count the decades they have been fans of the movies will pick up on a few clues that Daniels has carefully left in his narrative.

Discomfort, isolation and insecurities are all exposed in a way that makes the reader feel like Daniels is hosting an episode of Mr Rogers or Jackanory, and his personal relationships with those he worked alongside - happily or otherwise - are all dealt with in a way that is mature and explanatory. Perhaps most touching of all is that Daniels takes the opportunity to say goodbye to the fallen heroes of the Star Wars saga.

Published by DK and available in both hardcover and paperback format through Amazon.com, Amazon.co.uk, Barnes & Noble and Walmart.com, with an MSRP of $24.99, I Am C-3PO: The Inside Story is out now. For those of you wanting a real treat, check out the audiobook, which is read by Anthony Daniels himself.

A portion of purchases made using the links above may generate a small affiliate income. This doesn't affect what you pay and is only used to help Rebelscum continue bringing you the Star Wars collecting news you need.
SEND