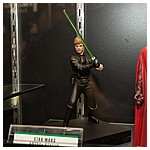 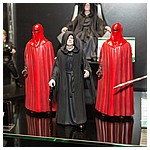 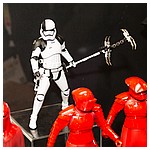 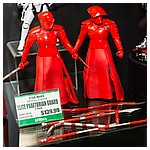 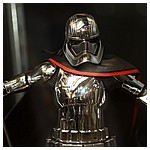 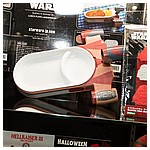 On display for the first time Kotobukiyo had the Emperor Palpatine three-pack featuring two Royal Guards and a new head sculpt. Also in the case was a Luke Skywalker Jedi Knight fully painted. Eagle-eyed readers will notice the gold stripe around the top of the boots, Kotobukiyo reps were not familiar with the reasons that was added and it may just be a sample error. Lastly, we got a first look at the ArtFx Captain Phasma statue, which was quite impressive in all of its shiny glory.

These were originally available in Japan but are not coming to the US (distributors unknown). The Millennium Falcon and Landspeeder serving dishes are removable and machine washable. There are different versions of the Kylo Ren chopsticks, one that lights up and a standards non-lit version. The real gems here were the Darth Vader and BB-8 pancake pans with built in molds. Now make a perfect pancake every time!!!
SEND