LEGO: Large-Scale Porg Too - Part II
Posted by Jeremy on March 27, 2018 at 08:33 PM CST
Over at the Eurobrick forums the available information on these brick-built porgs are starting to nest, with Sir von Lego giving as a set number, Eurozone price point and expected release date.

A number of weeks ago, when it emerged that the last two buildable figures of 2018 had been cancelled, Sir von LEGO assured Eurobrick readers that LEGO was going to release a "compensation set" a few months later to make up for the demise of 75538 Super Battle Droid and 75539 501st Legion Clone Trooper & AT-RT. It's looking more likely that this is it.

Sir von Lego's initial leakette compared this set to BB-8 (75187), which was released last year. Using this set as a baseline and assuming that the approximate US$85 price tag is an indicator in the set's brick count (and therefore size) we can extrapolate some expectations. 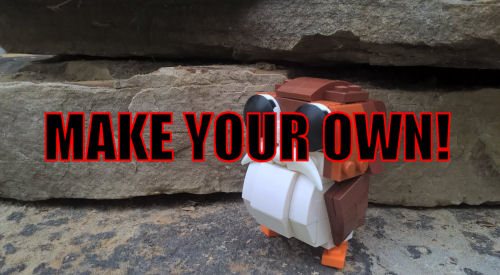 Of course this could all be make believe, but it's still fun to try and piece together a cohesive idea of what LEGO will bring to our build tables. Until they make an official announcement this set is as solid as Luke Skywalker on Crait. While you wait for this speculation to be clarified why not pop over to LEGOshop.com where there are a minifig-scale porgs available in 75200 Ahch-To Island Training and 75192 UCS Millennium Falcon for you to practice your skills on.
SEND