LEGO: Nuremberg Toy Fair Reveals
Posted by Jeremy on January 29, 2019 at 05:36 PM CST
Spielwarenmesse - the Nuremberg International Toy Fair - started today and LEGO has come out strong. Unlike last year, when LEGO severely curtailed press access and only had a limited amount of Star Wars sets, there is a huge amount of information coming out of the show thanks to stalwarts Zusammengebaut.com, who have been live blogging all the LEGO reveals.

All the sets below will be released at general retail on April 1st. 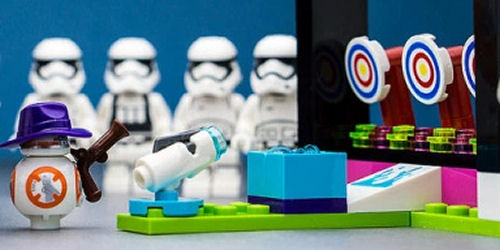 The newest addition to the line is the Action Battle sets, a themed series of midway/sideshow builds that have a shooting range appearance.
Those that have seen these sets have told us that each has two bases (ready player two?) and puts one faction of the Star Wars universer against the other: Imperial speeder bikes against tree-borne ewoks, and AT-AT with snowtroopers battling Hoth Rebel soldiers with turrets are the hard targets of the first two of these child-like games of skill. 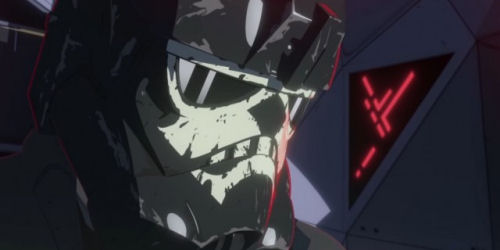 With a succesful first season, and news that a second season has been approved, the inclusion of a subtheme based on this intra Original/Prequel Trilogy television series doesn't come as a surprise.
The red TIE Interceptor flown by the First Order pilot Elrik Vonreg will come with a similarly coloured minfig, as well as a Kazuda Xiono minifig, Bucket and General Leia, while Black Ace's ugly includes Poe Dameron, Griff Halloran and BB-8 minifigs. 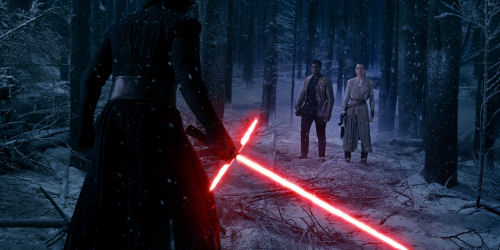 The only Star Wars movie set that isn't linked to the 20th anniversary is a forested playset that recreates the duel between Rey and Kylo Ren, and serves as a reminder of the climactic plot point in the upcoming Star Wars episode 9, due out later this year.
This set is pegged to come with new Kylo Ren and Rey minifigs. 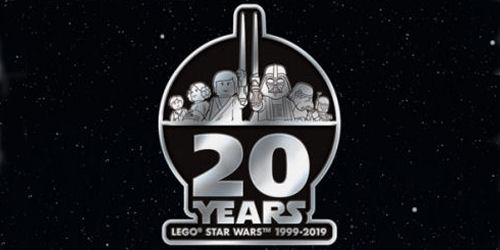 The big reveal, of course, was the special edition 20th anniversary line up. This collection of five sets recaptures three of the original 1999 sets, but in a modern format, and revisits two more recent sets.

Each will come with a specially designed minifig that captures the originality of the two-decade old line by using the original prints, with the added touch of the 20th anniversary logo at the back of each torso. The print on these minifigs are not a recreation, as the original Illustrator file that was used when they were first issued has been dug out from the LEGO digital archives. Each comes with a display stand. 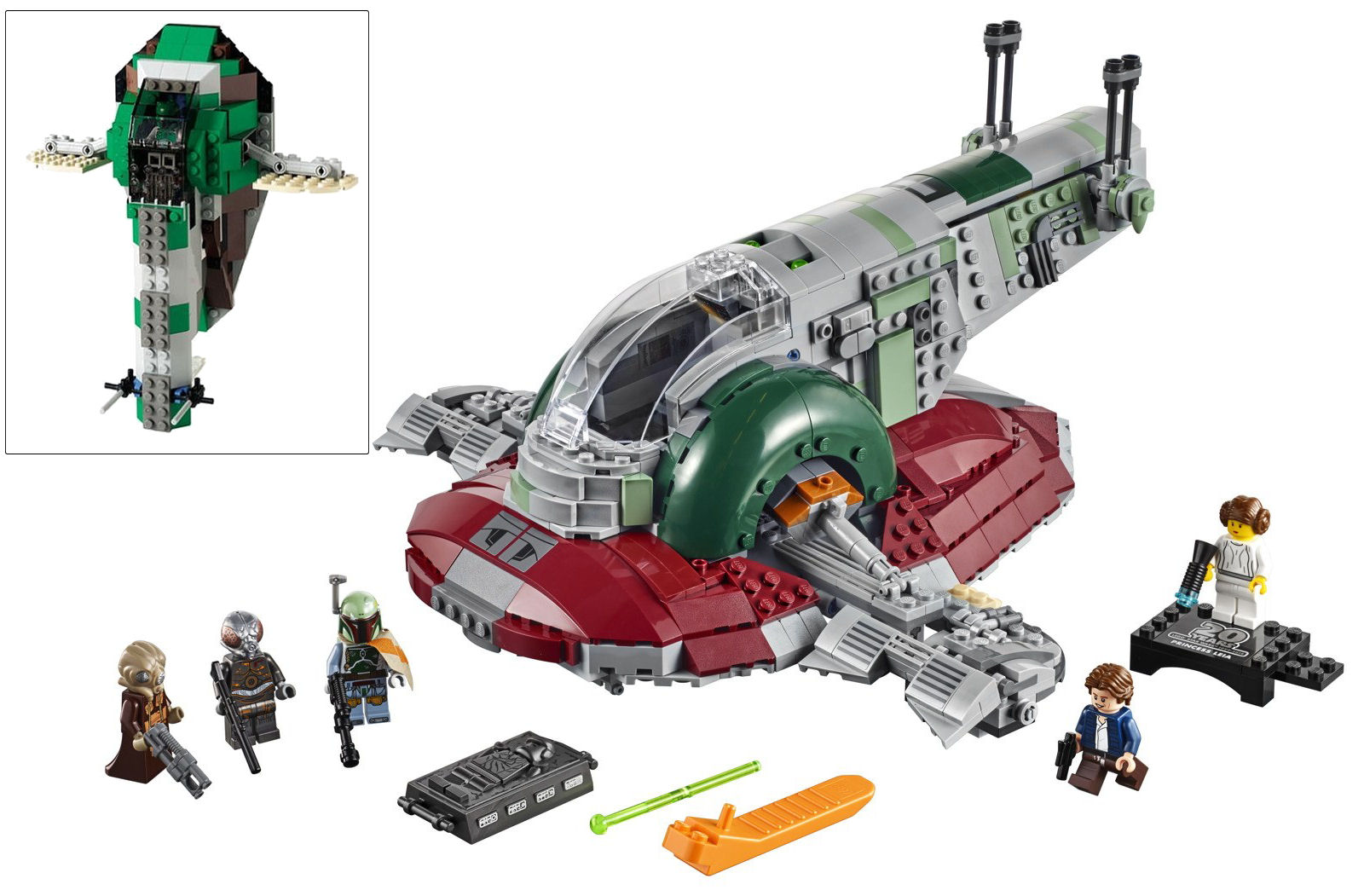 Build Boba Fetts personal Slave I starship and travel with him through the LEGO Star Wars galaxy in search of fugitives! Grab the handle and fly him around. Pull the triggers to fire the spring-loaded shooters. Load Han Solo trapped in carbonite into the hold and deliver him to collect your payment. Its another exciting day in the life of a bounty hunter! 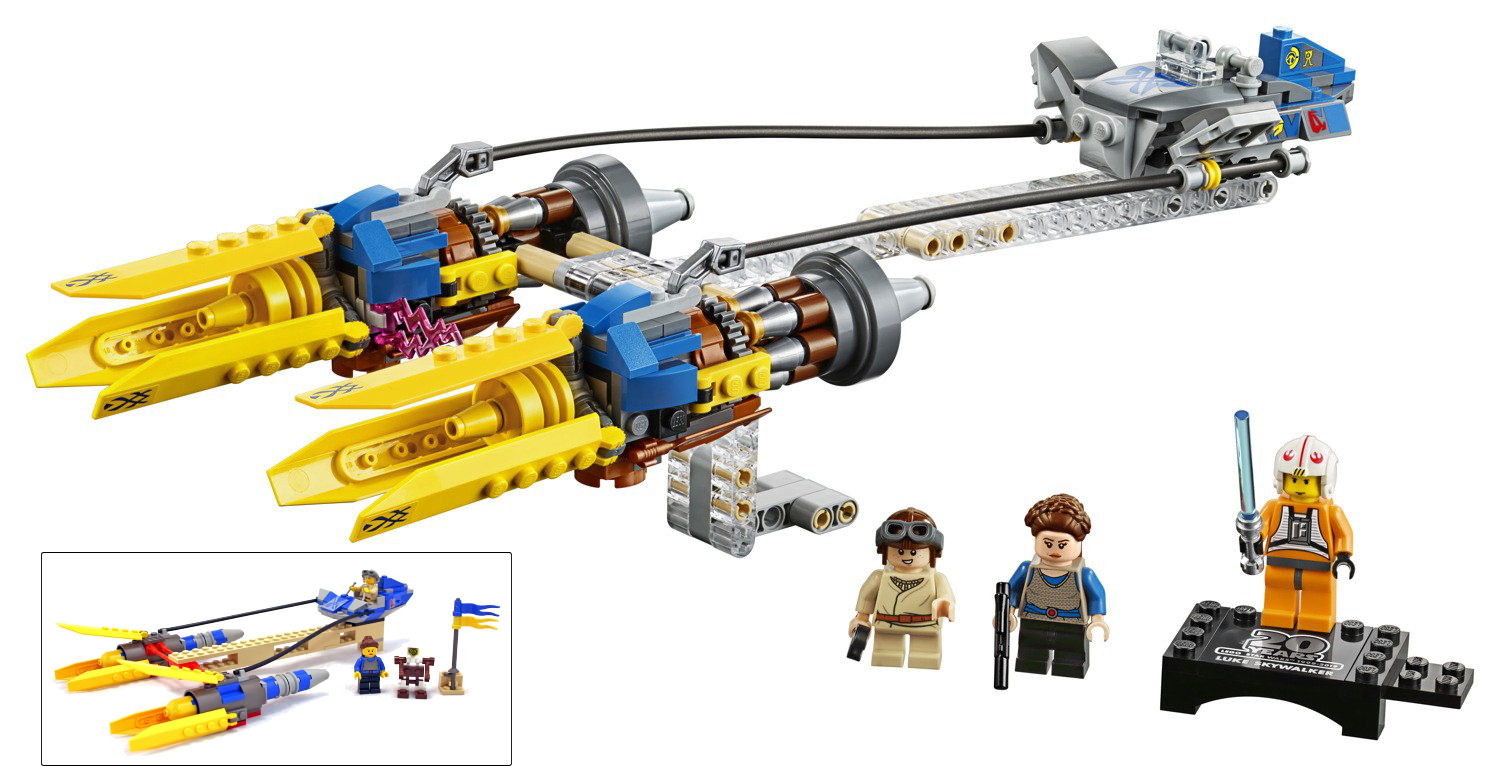 Speed to victory in Anakins Podracer! Sit young Anakin Skywalker in the cockpit and lower his goggles ready for the race. Then fire up the huge engines, grab the play handle and zoom through the canyons of Tatooine or your living room! With Anakin at the controls, victory is yours!

Sound the alarm, Echo Base is under attack! Win the Battle of Hoth with Luke and Dak Ralter in their amazing LEGO Star Wars Snowspeeder from Star Wars: The Empire Strikes Back. Speed over the ice and launch the spring-loaded shooters. Then fire the rear stud shooter and harpoon with string. On the ground, help the Rebel Trooper take aim and fire the gun tower stud shooter. Those Imperials must be defeated! 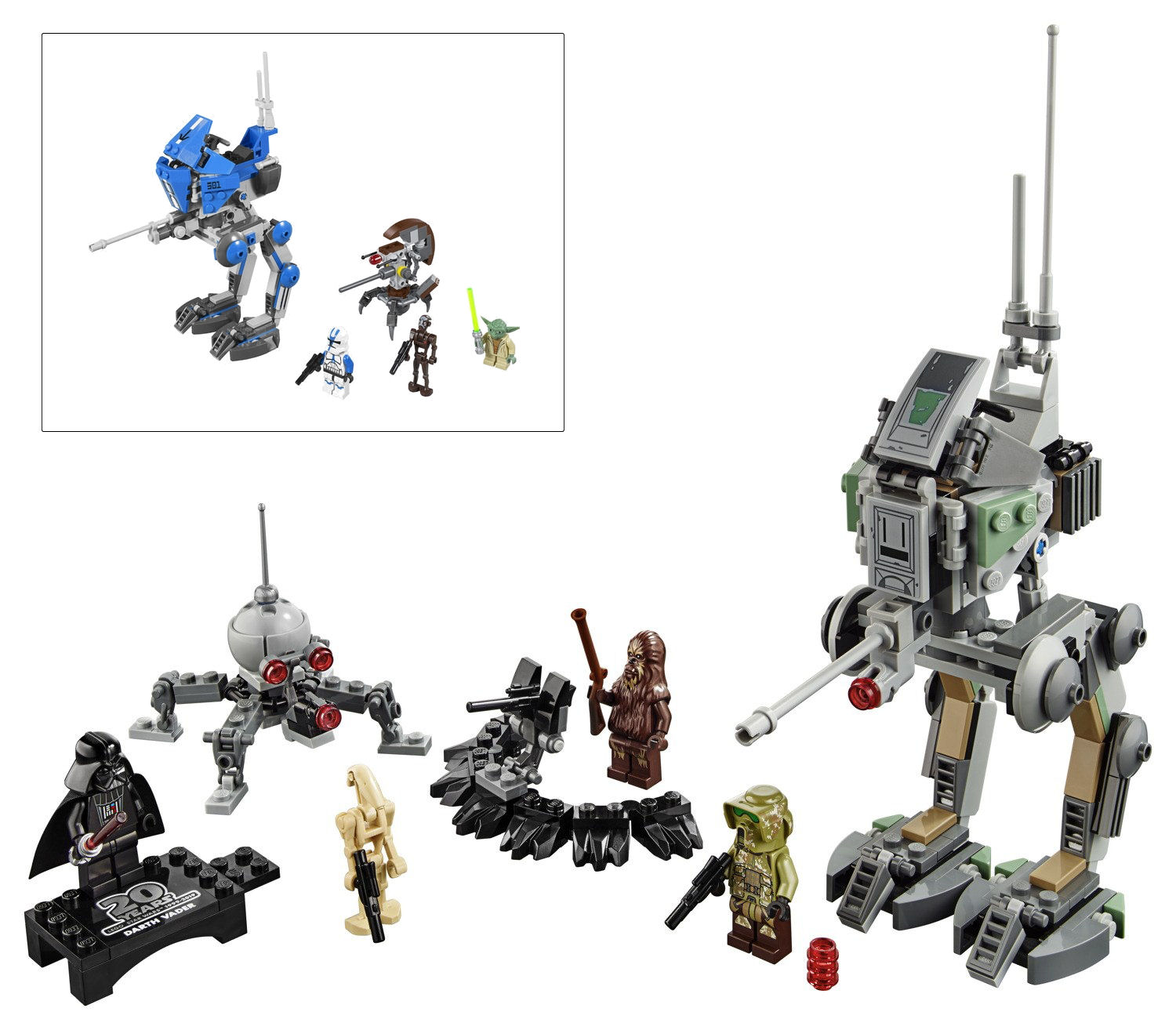 Protect the Wookiee warrior with the armored Clone Scout Walker! Sit the Kashyyyk Trooper in the seat of the armored AT-RT Walker and stride in battle. Turn and fire the stud shooter before the Dwarf Spider Droid destroys the trench with its own stud shooter. The Clone Army must win at all costs!

Deploy the troopers with the LEGO Star Wars Imperial Dropship! Load them onto the platform and store their stud blasters for the flight. Then sit the Shadow Trooper in the cockpit, fire up the engines and blast off for another exciting battle against the Rebels!