LEGO Star Wars Plush Dolls
Posted by Jeremy on November 25, 2019 at 12:08 AM CST
Looking like they should be in a claw machine game at the county fair are these three over-sized plush LEGO minifigures, that are seemingly inspired by Star Wars characters Rey (in her Jakku outfit), a Stormtrooper and Chewbacca (wearing a demogorgon mask). 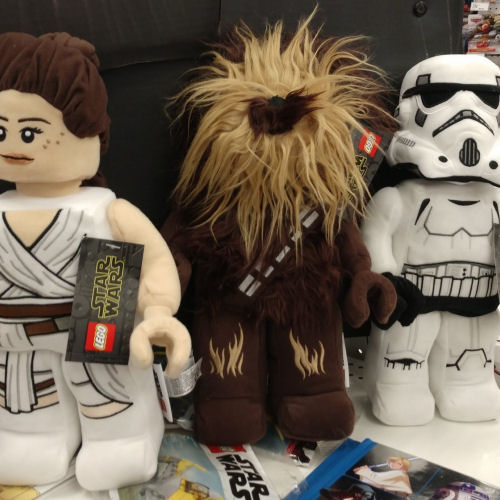 The photo, which is believed to have been taken in an unknown branch of Target somewhere in the US, has no identifying SKU numbers or prices so further details about these three curiosities can't be determined yet. It is likely, however, that these are out earlier than expected and will probably be available everywhere on December 20th.

So, if you were too young to enjoy 1999, when anyone could get a Star Wars license and every shelf in every kid of store was packed with merchandise from The Phantom Menace, congratulations - your time has come.

Who's looking forward to the piñata version to hit?
SEND