LEGO: What Happened On D-Day?
Posted by Jeremy on October 2, 2017 at 03:07 AM CST
In a country where LEGO has very, very little footprint there were two official outlets that carried the 75192 UCS Millennium Falcon for its official public launch day of October 1st. So what was the big secret to their success?

Chiefly it came down to a lack of involvement on the part of LEGO, because both the LEGO certified store (LCS) at Dreamworld and the LEGO Discovery Centre (LDC), operated by Merlin Entertainment, in Melbourne aren't part of the VIP scheme. Since these two outlets opened in January 2017, Australian AFOLs have bemoaned the fact that they couldn't use their VIP membership to gather points or gain Early Bird access to exclusive releases - a situation that is no different to many other LCS, LDC and LEGOLAND Parks around the world.

But on October 1st it all came good for Aussie LEGO fans, because without the stock depletion that other LEGO outlets encountered on September 14th, both the Gold Coast and Melbourne stores still had sets to put out on the shelves. Unlike the midnight opening at LEGO Leicester Square in London, fans in Australia had to wait in line until doors opened to get their chance to spend their AU$1300.

Down in Melbourne where the LEGO Discovery Centre is ensconced in the swanky Chadstone Shopping Centre fans weren't able to perform an all night vigil, but instead the shopping centre opened its doors 30 minutes early to allow the early risers in.

The brave ones, like Craig W from Brisbane, got to the Dreamworld shop in Queensland early in order to ensure their status in history. Getting there at around 3pm the day before, Craig found that only four other people had beat him to the specially marked out area. And so, without any indication that staff were going to hand out reservation numbers like other LEGO brand stores (LBS) did for the VIP Early Access, he settled down for the long haul. 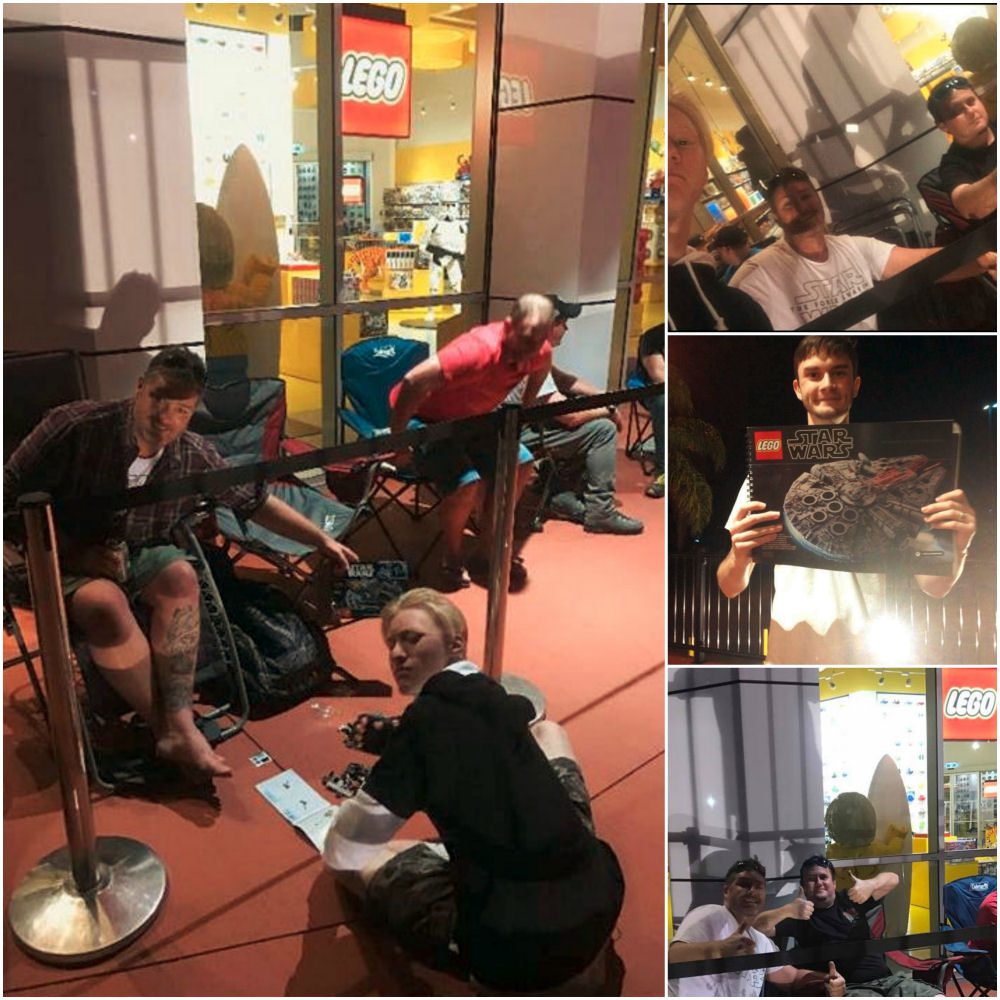 As the Queensland weather threatened to turn tropical those brave few began to bond, with a few beers and plenty of LEGO talk, and a slow trickle of like-minded fans began to appear - some with camp beds and duvets (or doonas as they are known here) while others showed how hard they were by stretching out on the cold, bare conrete. As luck would have it the weather stayed dry and the temperatures remained at a balmy 16 Celsius (60 Fahrenheit), and by 3 am the crowd had swelled to around 25 people. But as the sun came up so did the numbers, with over 100 people gathering in the hope that there would be enough to go around.

Adding to the excitement were the numerous rumours on how many sets would be available. Speculation was rife - with forty five (according to Bricking Around) being the most credible numeral being bandied about. Others cited 46, 47, 48, 49 and so on - the number increasing sequentially the further down the queue, until the last person decided that there was going to be one more than the total number of people lining up. Happy days!

No one really knew how many 75192 UCS Millennium Falcons were available - all they knew was that there was at least one in store because the store's manager had been leaned on by LEGO to use one of his precious stock items for a display model, and staff had been busily putting on the finishing touches so it could be rolled out in time for doors opening.

It turned out there were 50 (including the display model) in store and, with a limit of one transaction per person, by 615am the 50th person has rocked up and the store's stock was officially sold out. As the minutes ticked towards 9am the atmosphere in the crowd got more jocular and a loud cheer went up when the first ten were allowed inside. Asked what the mood was in the store Craig said it was one of happy relief: "Thank god! Finally long wait over! happy as, laughter, shaking hands we all new (sic) each other after talking all nite! great fun!!" 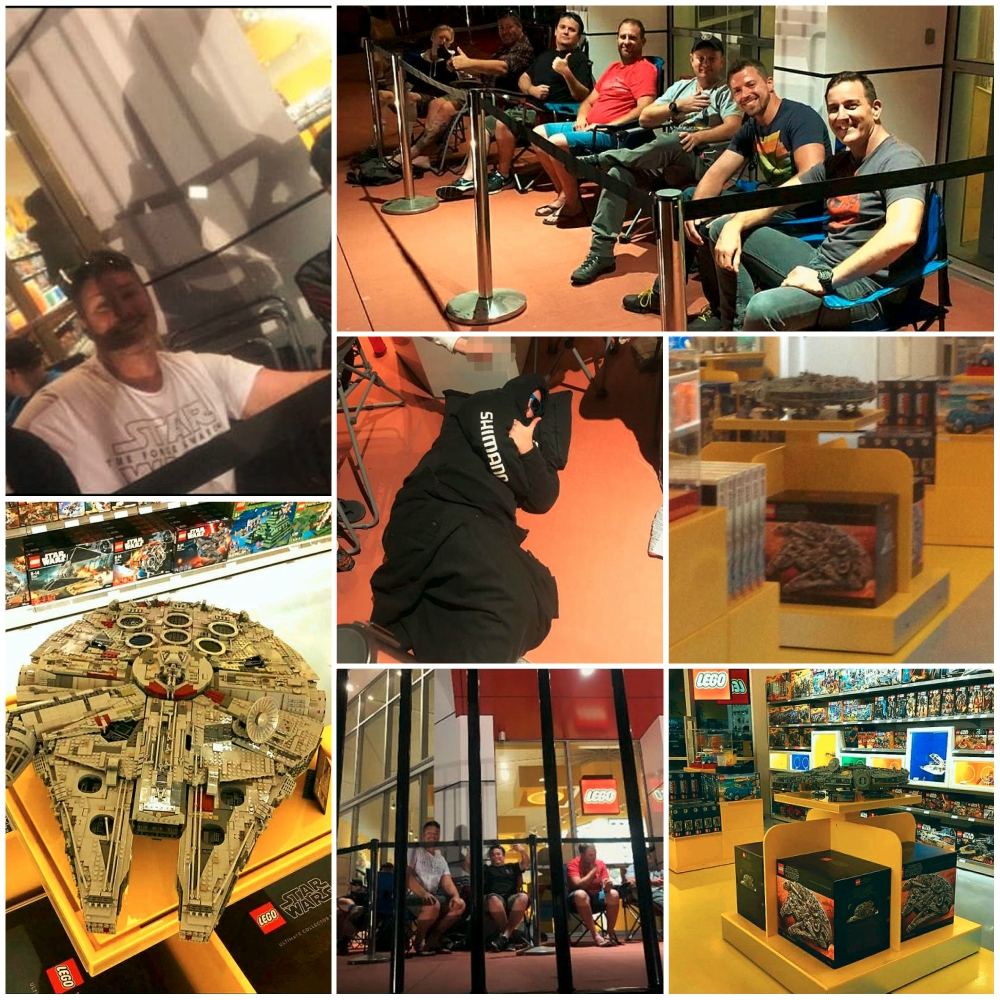 What was on the mind of the happy owners? For some it was breakfast, others were too glazed from lack of sleep to contemplate the 20 hour build they faced, while one soul only had a 12 hour drive back to Sydney to look forward to! Craig, on the otherhand, had a much shorter drive and opened the shipping box as soon as he got home just to bask in the greatness of it. He promises he's going to start building it soon though - he just wants a quick nap first!

For those of you still hoping to get one there is a chance - VIP members can access a wait list through their online LEGO.com account and locals can call the Dreamworld shop on (07) 5588 1151 to put an order in. Happy hunting and leg godt.
SEND