Pre-Toy Fair: The Vintage Collection Preview
Posted by Curto on February 12, 2010 at 08:39 AM CST
Vintage is back! For the past 3 years now, Hasbro has been planning to bring back the classic Kenner look and feel to the Star Wars brand, and since this year is the 30th anniversary of The Empire Strikes Back, what better time to do it? 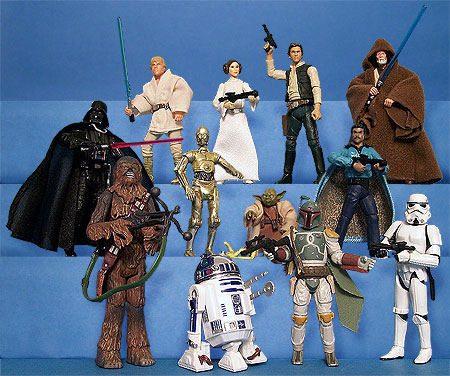 After a successful run in 2004 with the Vintage Original Trilogy Collection ("VOTC") line, a line of updates to a dozen classic characters from the classic movies, this line featured super-articulation, soft goods, and appropriate accessories, without the kid-focused "action features" that dominated the brand at the time. The cardbacks were packed in special clamshell cases, to keep the cards protected from damage.


Two more waves followed (2006's "VTSC" and 2007's "VTAC"), this time including special "gotta get them all" incentive for exclusive mail-ins.

But Hasbro soon came to realize that it wouldn't be long before they went through the main characters, so this type of deluxe line probably wouldn't have much more life left in it. Still, there's a lot of love for this card design, both among the Hasbro team and the collecting community. For many of us, this is the look we grew up with, and there's no denying the nostalgic power of Star Wars in the hearts of fans.

A few other questions arose...since the quality of the basic figure line had caught up (and in some cases, surpassed) a deluxe line, so would fans support this higher price point? Plus, just how deep could Hasbro go...should they re-create only the original 95 characters, many of which had already gotten super-articulated updates, and it wouldn't take long before all of the main characters were made, and only second-tier and third-tier choices remain.

So Hasbro turned to the collectors...what would they like to see done with this "Vintage" line in the future? This very site ran an online poll (which was also run at the Hasbro booth during Celebration IV) asking what we'd like to see. During this time, an interesting development came up...Lucasfilm suggested opening up the character selection to include Classic Trilogy characters never made by Kenner, and also Prequel Trilogy characters.

The results gave Hasbro a clear path to follow, and this year, we're finally going to see the results. For the 2010 "realistic" toy line, Hasbro is once again paying tribute to the original Star Wars line with a return to the Vintage Kenner cardbacks, now with modern-style figures. Gone are the clamshells (and the higher pricepoint), as well as the gimmicky pack-ins (although the "Droid Factory Build-A-Droid" seires will be missed!).

While the majority of the line has been kept under tight security, we got a tasty sneak peek at some of the characters in the first wave, appropriately based on The Empire Strikes Back.

What else will we see this year? We're about to find out, but thanks to our team of rebel spies and forumites, a great "rumor list" has been faithfully maintained in our forums, compiling all of the hints, teasers, and "what-ifs" that have popped up over the past few months.


What follows is a list of characters that have either been shown by Hasbro or revealed in the Q&A sessions. There are a lot more in our fourms, but this is enough to get excited over!

REVENGE OF THE SITH
- Anakin Skywalker

ATTACK OF THE CLONES
- Queen Jamilla


Finally, since this look is slated to continue for at least 2 years, it's likely we'll see more of the classic deisgns brought back, possibly to even include characters from the Expanded Universe. So, just for fun...here's a look at what these new Vintage Collection cardbacks might look like. These cardbacks are ones I created years ago for the FFURG Template Vault. You'll find a lot more custom cardbacks there, including some blank templates to make your own!

Star Wars: The Bad Batch
The Vintage Collection - General Toy Discussion Thread
sand crawler
What is your latest Kenner acquisition?
DeAgostini / Altaya is back with a new ships & vehicles subscriber line (so far, only in France)
UK Findings and Buyings Thread
Recent Acquisitions - The Black Series 6"