LEGO: Buildable Figures - Have They Been Cancelled?!
Posted by Jeremy on March 6, 2018 at 07:25 PM CST
Whether you call them constraction (shudder) or buildable figures, this subtheme of the LEGO Star Wars has never really sat well with the bulk of collectors and fans, and the news that two new additions have been canned due to a lack of retailer interest has made any further debate a moot point.

Initially reported in late December, 2017, when a LEGO trade catalogue started to circulate, was the existance of two new buildable figure sets - 75538 Super Battle Droid and 75539 501st Legion Clone Trooper & AT-RT - which were to be released in August of this year. 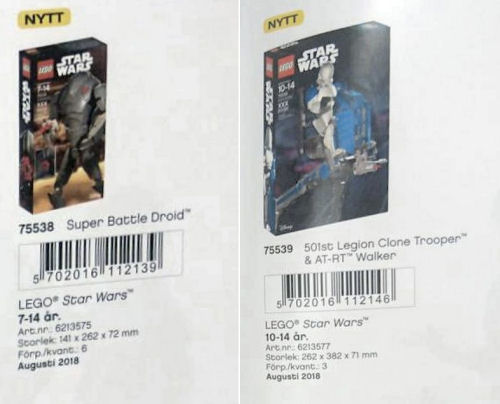 The catalogue, which originated in Sweden, was an advance presentation of what LEGO would be displaying to the toy industry once the media had completed their coverage of the New York Toy Fair.

With the concept/design/approval/production/distribution cycle employed by LEGO taking about 12 to 18 months for licensed products these two buildable figures were almost at the point of commitment by the time the Toy Fair season started, and LEGO needed orders to be able to roll them out. Word is, however, that they didn't get enough interest and both have been cancelled.

The rumour started on March 3rd when Eurobricks member Falconfan1414 posited "So I got some news apparently according to Lego world club none of the constraction figures got ordered by retailers so the battle droid and 501st Legion clone trooper were canceled [sic]."

Being an internet forum where everything is either true or false the statement was immediately jumped on by nay-sayers, yay-sayers and soothsayers and opinions were cast around willy-nilly until LEGO leaker Azani made it clear what his thoughts were:

"Nope. Sorry man, but not even slightly; total nonsense. I'll be doing my best to make sure that this doesn't start making the rounds. :/

First of all, that's not what they said. Second of all, they updated their post over on VK.com with a statement that reads "Update: this is not correct" - three or four hours ago.

Third, I know for a fact that 75538 and 75539 are coming, at least in Europe, because they're being listed online by many, many retailers. Not going to lie, it's almost too many to count. All of the system sets are being listed as well."

However, as with all statements made on the internet, a counter-argument was quickly made when Sir von Lego, a well-connected and trusted source, stepped in to the fray:

"Both of these sets (Clone Trooper with AT-RT and Super Battle Droid) wont see the light of a day: cancelled.

We will get another set as compensation, not a constraction one."

While researching the rumour Rebelscum has been contacted directly by Azani who told us:

"Unfortunately, I was also wrong. They are cancelled; I heard as much from one of my guys."

Pressed for details it emerged that Azani's source who confirmed the rumour attended Nuremberg Toy Fair and noted that these buildable figures weren't even offered for viewing in the confidential display room either.

The debate on Eurobricks.com - and other corners of the Internet - is still raging.

Not withstanding the news that 75538 Super Battle Droid and 75539 501st Legion Clone Trooper & AT-RT buildable figures have been axed, Brick Fanatics has also picked up a thread that the entire LEGO Star Wars buildable figure line will be cancelled next year.

Whether the entire character and creature building system (CCBS) is being ditched is unknown, but as this method is a core construction technique to several proprietory themes - such as Bionicles and Hero Factory - it is unlikely.

With the recent Solo set description reveal coming eight weeks before their April 20th release indicates there is still a chance we could see a similar leak in June which could indicate a limited release, such as through a retailer exclusive.

Of course this is still speculative information until confirmed or refuted by LEGO through official channels. 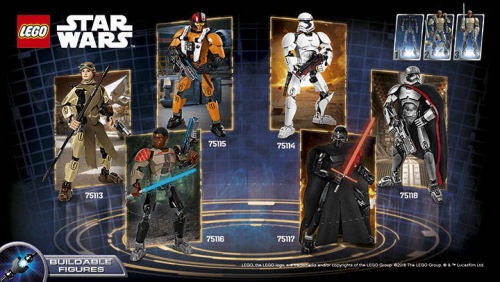 If you aren't up to speed with these stand-alone builds, here's a brief overview:


The current collection of buildable figures will augmented by the release of 75535 Han Solo and 75336 Imperial Range Trooper on April 20th, when the first wave of Solo: A Star Wars Story sets hits shelves. There are fifteen LEGO Star Wars buildable figures available now on LEGOshop.com - grab your favourite characters soon before there's a run on them.
SEND