LEGO: The Wuher Abides
Posted by Jeremy on November 27, 2017 at 10:04 PM CST
Earlier this year we picked up a rumour of a mystery set going by the name "75205 CC", and in typical fashion we sat on it until our others sources were able to provide corroborating information. Two of the most common speculations was that CC stood for Cloud City or Chalmun's Cantina (Chalmun being the Legends Wookiee who actually owns the cantina and employs the more well known Wuher), and now kockashop.hu has posted a page with product details. 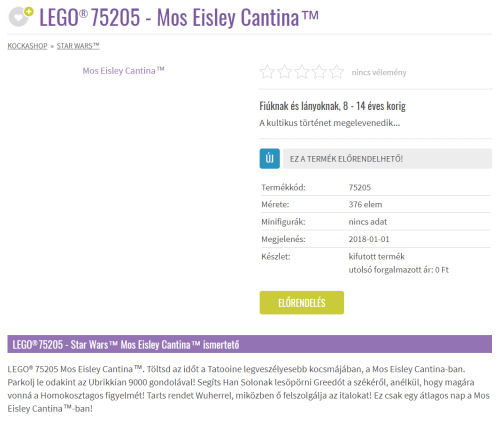 A quick copy and paste through Google's translation service gives us this anglicized version of the set's description:

Spend time in Tatooine's most dangerous pub, Mos Eisley Cantina. Park outside with the Ubrikkian 9000 gondola! Help Han Solo swoop up Greedo from his chair without letting the Sagittarian's attention. Keep up with Wuher while he drinks the drinks! It's just an average day at Mos Eisley Cantina !

One can only guess what the "Sagittarian" is!

UPDATE: Apparently "Homokosztagosok" means Sandtroopers. And apparently we have at least one reader in Hungary. Who knew! Thanks to Jakob Gipsch for mailing in.

So could the current rumour, which has just been unofficially substantiated, be even more grandoise? Unfortunately not, because with only 376 bricks it sits firmly in between the first and second when it comes to piece count. But at least we have a strong indicator that Wuher will be minifig'd in the coming year.

Though we are aware that the coincidence of having two similarly numbered sets (75052 and 75205) is too much to ignore we are putting our credits on the sabacc table and holding out for an Idiot's Array.
SEND