BBTS News: Bloodborne, DC Multiverse, Transformers, RoboCop, Yu-Gi-Oh!, Mortal Kombat, Power Rangers, Tekken, TMNT & More!
Posted by Joey on August 18, 2021 at 11:29 AM CST
--------------
NEW PRE-ORDERS
--------------
From the PlayStation 4 action RPG Bloodborne: The Old Hunters comes a figma of Lady Maria of the Astral Clocktower! Lobo and Superboy-Prime have joined McFarlane's DC Multiverse series! violently insane criminal that is hopelessly addicted to a highly-addictive narcotic known as NUKE, RoboCain from Robocop 2 comes to life in 1/18 scale from Hiya Toys! First 4 Figures is proud to introduce their latest PVC statue collectible, Dark Magician! This is the second statue to release in the Yu-Gi-Oh! PVC lineup. Super7 has unleashed the first ever The Worst ULTIMATES! Figures upon the world! The Transformers Studio Series line is expanding to include the epic moments and characters from the classic The Transformers: The Movie, bringing fans a whole new series of screen-inspired figures to collect! Four new figures from Mortal Kombat 11 are in the works from McFarlane, including Kotal Kahn, The Joker, Liu Kang and Shao Kahn! KING is not only a masked professional wrestler, but also the proud owner of an orphanage, and has been created in 1/12 scale by Storm Collectibles! 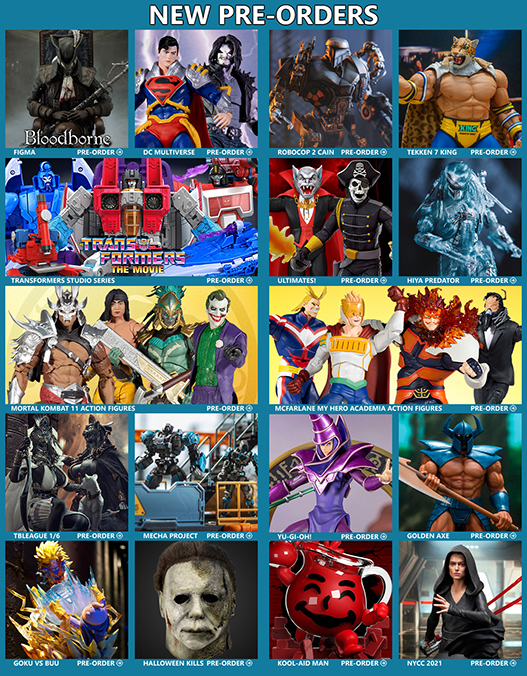 ------------
NEW ARRIVALS
------------
With Wave 3 of the Teenage Mutant Ninja Turtles Ultimates from Super7 you can relive the fun and excitement of the classic Teenage Mutant Ninja Turtle action figures. Masters of the Universe: Revelations figure arrivals include He-Man, Skeletor and Moss Man! The Heath Ledger Joker MAFEX action figure is here and wildly poseable for crazy action poses; his two interchangeable heads with different facial expressions and multiple hands will make acting out your favorite movie scenes easier than ever! From the popular My Hero Academia anime, Katsuki Bakugo joins the Amazing Yamaguchi action figure series! Standing around 6 inches tall, this articulated figure includes interchangeable effects to show off his powers, interchangeable facial expressions with different eye parts, and alternate hands for unique poses. He's back in stock! The Mezco Batman Ascending Knight figure pays homage to the character as he first appeared in Detective Comics. The shape of his cowl, the shorter gloves and the smaller symbol on his chest are all inspired by his original debut in the comics. 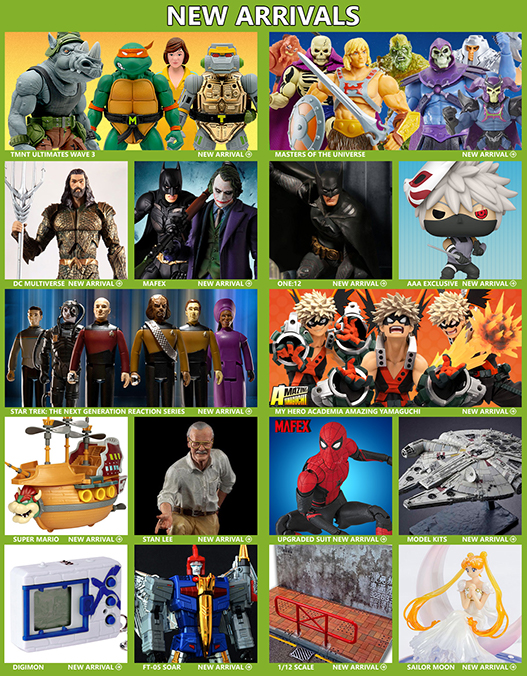 Hasbro Black Series Helmets and Dark Saber
FS/FT: GG Busts and Jumbos
Hyperreal Line
Some of my Super Mario Bros. customs
Recent Acquisitions - The Black Series 6"
So, what of substantial collectible value did you destroy or lose in the past?
Jabba's Sail Barge