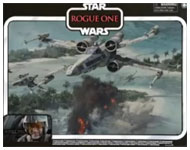 Petition To Have Hasbro Produce General Merrick And His X-wing
Posted by Adam on January 20, 2020 at 11:06 PM CST
Show your love for Rogue One and General Merrick by signing the petition to have Hasbro produce Blue Leader and his X-wing!

It is time to become more active and show Hasbro that there is support and love for the 3.75 inch line. Let's no longer wait for Hasbro to announce product but get involved! Kenner started it all in the 70's with the 3.75 inch line and this is still what most fans want to collect. However, we are seeing a lot of re-issues but there could be done a lot more to keep capturing the magic of Star Wars and keep collecting alive.

Rogue One is one of the fans favorite movies but didn't see too much love yet in terms of products. General Merrick participated in the Alliance's aquisition of the Galactic Empire's plans to their ultimate weapon, the Death Star, in the Battle of Scarif, flying as leader of Blue Squadron in a T-65B X-Wing Starfighter.

The blue squadron is missing in the lineup of Hasbro's X-Wings. Show your support and sign this petition to have Hasbro produce Merrick and his X-Wing in the Vintage line.Hasbro should produce Merrick on a Vintage card and they should either include him carded with the X-Wing like they did with Jabba's Palace, or produce both separately boxed and carded.