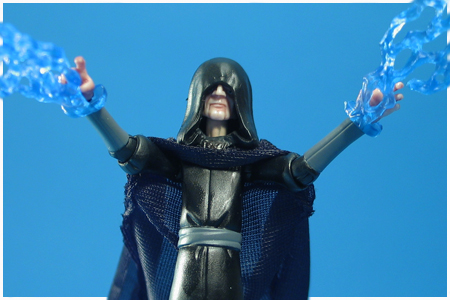 with Snap-On Sith Lightning!
The mysterious Darth Sidious manipulates events from the shadows to achieve his evil plans. He keeps his identity a secret as he gives orders to his minions, and uses his power and cunning to influence others and shape the outcome of the war. Darth Sidious was the forty-fifth of fifty figures released in 2009-2010. The wave included Hondo Ohnaka, Thi-Sen, Anakin Skywalker (Cold Weather Gear), Clone Commander Stone, and Commander TX-20.