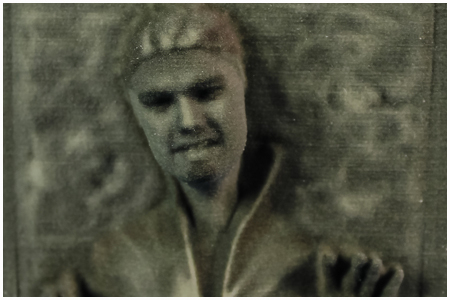 Chris Wyman In Carbonite (Don't worry. He's alive... and in perfect hibernation)
Relive the classic scene from Star Wars: Episode V The Empire Strikes Back where Captain Solo is frozen in carbonite with the Carbon Freeze Me experience. Carbon-freezing has been used throughout the Star Wars universe from shipping cargo across the galaxy to tricking life scanners to capturing prisoners. Created especially for Disney Parks, this three-dimensional, 8-inch figurine features your likeness cast in a replica block of carbonite. Make this figurine your favorite wall decoration, just like the gangster Jabba the Hutt. May the Force be with you!
Product Packaging
Product Information
Manufacturer: Disney
Year: 2012
Original Retail: $99.95
Edition Size: Made to order

Included in the box:
Points of Interest: