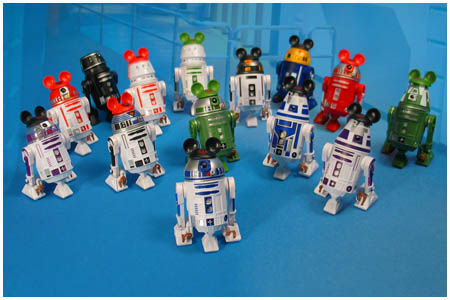 Special Photo Archive With Creator Interview
In March, 2012, we learned that Disney had something really special in the works. It was rumored to be some type of factory that allowed park guests to build their own droids. This wasn't so hard to believe given the popular "Build Your Own Lightsaber" kiosk's that have been open since 2006 along with the Hasbro Build-A-Droid pieces available in the Legacy Collection action figure line from 2008-2010. Fast forward to May, 2012, and the rumors are no longer rumors, but solid fact and the Droid Factory is now open for business at Disneys Hollywood Studios at the Walt Disney World Resort in Orlando, Florida.
TRUNKS

Over the past ten years and more so than ever before, droid action figures have become increasingly popular among collectors and children alike. Between the films, the books, the comics, and the ongoing Star Wars: The Clone Wars television series, there never seems to be a shortage of new droids that need the action figure treatment.

With this new Factory, the possibilities are truly endless, especially if Lucasfilm and Disney decide to include more than the R-series Astromech droids in the future. Once all of the parts are released, you'll be able to choose between an R2, R3, R4, R5, R6, R7, R8 & R9 dome, an R2 & R7 body and the standard Astromech right, left and middle legs in a multitude of colors along with several different hats (Mickey ears (out now!), Indiana Jones fedora, Jack Sparrow Pirate hat, Goofy hat with ears & Yoda hat with ears). The complete set consists of 25 different domes, 13 bodies, 10 right legs, 10 left legs, 5 middle legs and 8 hats for a total of 71-pieces in all. The R6, R8 & R9 domes along with the four extra hats are not scheduled to be released until this August. Equally exciting are the rumors circulating that Hasbro is bringing back the Build-A-Droid figures to the action figure line for 2013. One could conceivably hunt strictly for droids and amass quite the collection...which is pretty darn cool!

The Droid Factory counter is about eight feet wide and about two feet deep with two part stations on either side allowing more than one person to enjoy it at once. With all six parts laid out, you could completely build a single Astromech droid in 10-15 seconds easily. However, youll have to work diligently to find the pieces you require by sifting through three rows of six bins filled with droid parts. While the parts are separated by type, all of the colors are mixed together which is reminiscent of digging through the LEGO box trying to find that one piece you need to finish your build. The process of building a complete Astromech droid is as follows: Choose your dome, choose your body, choose your right and left legs (power cables forward, kids!), choose your middle leg and finally, choose your hat. One word of caution when putting your droid together: Its not a good idea to force the middle leg into place. It only goes in correctly one way and if you push too hard, you could weaken the plastic and actually snap it in two, so take care when you are assembling this piece.
RIGHT LEGS

Each droid you complete is placed inside a protective clamshell case for safe keeping, but can be removed at any time without having to break the plastic or tear the card which is nice for carded collectors or for people that want to dismantle their droid and build it again. You have your choice of a single carded pack for $11.95 or a double carded pack for $18.95. Each droid comes with a sheet of letters and numbers so you can name your creation. There is a blank area towards the top of the card for these stickers to be applied.
R2 UNIT DOME

We recently sat down with Cody Hampton, Associate Product Developer of Toys for the Disney Theme Parks, to ask him about the new Factory, his own collecting habits and possible future projects in the works.

RS: Cody, thanks for taking some time out of your busy day to chat with us about the amazing new Build A Droid Factory at Hollywood Studios.

Cody: No problem. I am just happy to be a part of this great new experience, and Im just as excited as the guests to see it open at Tatooine Traders.

RS: First off, how long have you worked for Disney?

Cody: I have worked for Disney for about 5 years, but what readers might find interesting is that I started as a cast member working at Tatooine Traders. I thought it was so awesome to put on the original orange and blue costume and go to work every day in a Star Wars store.

RS: Given what you do for a living, were going to go out on a limb and assume that you are a big time Star Wars fan and collector. What kind of items would we find in your collection?

Cody: I am a big Star Wars fan. I would have to say that my favorite personal item is my vintage lightsaber from the 1985 Droid Animated Series that my dad bought for me when I was a very young kid. I love that lightsaber because it was the first lightsaber where the blade would fully manually retract into the hilt. I liked to pretend that I was a Luke Skywalker and that R2-D2 had just launched my lightsaber to me.

RS: How many Star Wars projects have you worked on in your time at Disney?

RS: From concept to release, how long did you actually work on the Build A Droid project?

Cody: It has been a little over 3 years from concept to product launch.

RS: Who came up with the concept of creating an entire factory for guests to create their own droids?

Cody: Many members of the team contributed to the creation of the idea. My leader, Brad Schoeneberg (developer of the popular Build-Your-Own Lightsaber Experience) had been toying with the idea for many years. We felt that the 3 ¾ action figure size was the perfect way to execute the Droid Factory. If you are a Star Wars fan that remembers the vintage Droid Factory play set, then think of this Droid Factory as a large scale version where you can build really cool Astromech droids.

RS: In your own words, what makes the Factory so special and different from simply grabbing an action figure off a peg in the store?

Cody: I love the 3 ¾ inch action figures that you can find in stores, but the Droid Factory is the only place in the world where you can create a droid action figure that is uniquely yours. You can personalize your droid with colors of your choice and give it a unique personality. Not only do you build your own droid, but you also get to name it. You are the maker, so you can name it anything or after anything you want. I think one of the coolest parts of the experience is the headwear you can add to your droid, after it is built. I love the Mickey ear hats and all the other new hats releasing later this summer. What is also great about this experience, is that it is easy for young kids to build their own droid and great for all others that just love Astromech droids. Every time you visit the attraction you can build another new droid. You can never have enough Astromech droids! After you build your droid, you can display it in the packaging or play with it alongside your other Star Wars action figures. Who knows, maybe your droid was in the background in Mos Eisley or in the sandcrawler captured by the Jawas? The fun is that you create the back-story for your droid.

We are also excited about the all new dome styles that were created exclusively for this experience, including the R6, R8, and R9 Astromech domes. These R-Series dome styles have only been featured in the Expanded Universe and it is cool to have them as action figures. These will be available later this summer.

RS: With the droid parts currently available, what is your favorite droid and/or color scheme to create?

Cody: If you saw the Disney Parks blog, I created my own droid: R7-C4. I love the Star Wars movies and The Clone Wars, but I also enjoy the Expanded Universe, so I chose the R7 dome. R7-C4 has an orange color scheme, inspired after my favorite clone trooper, Commander Cody. I like to think if he had an Astromech droid, it would look something like that.

RS: What kind of response have you received from fans thus far?

Cody: The response from guests and fans has been very positive. The guests really enjoy building and personalizing their own droid. Guest are already sharing their creations on fan sites and social media sites. Its great to see all the unique color combinations and names for these droids. I encourage fans to continue to share their droids they build online. I love to see all the unique creations and names for all these different Astromech droids.

RS: With some parts not yet available, and since you have to completely build a droid to purchase each piece which can result in purchasing identical parts multiple times, weve heard that guests are actually allowed to bring parts in and swap them out for others to help finish off their sets. Is this accurate?

Cody: No, this information is not accurate.

RS: Is the Droid Factory a limited time offer or will this be something that guests can look forward to from now on when they visit Hollywood Studios?

Cody: If it continues to prove successful and popular with our guests, we hope that the Droid Factory will be an on-going experience available to those that visit Disneys Hollywood Studios. If you love Star Wars and Disney, there is so much to enjoy at Disneys Hollywood Studios including: Star Tours: The Adventure Continues attraction, Jedi Training Academy, the Build-Your-Own Lightsaber experience and now Build-Your-Own Droid at Tatooine Traders.

RS: Are there any other projects that you are currently working on that youd like to share with us today?

Cody: Some of the exciting items I am working on are the new additions to the Star Wars Muppet action figures: Animal as Boba Fett and Scooter as Lando Calrissian. This set is fun because it includes Animals drum sticks and a Link Hogthrob as Han Solo in Carbonite accessory. These will be available in August and are currently on display at the Star Wars Weekends event tent, Darths Mall.

RS: Cody, thanks so much for your answers, we really appreciate it and well see you at Star Wars Weekends!

Cody: May the Force be with youand your Droids!

What's In The Single Or Double Packs?