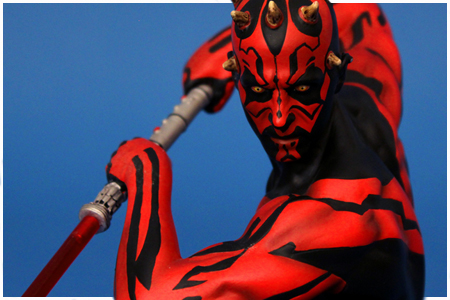 2011 Premier Guild Members Exclusive Mini Bust
Originally a Zabrak from the planet Iridonia, Darth Maul abandoned all traces of his former identity when he took on his Sith name and became a deadly disciple of the evil Darth Sidious. His devotion to the dark side was so extreme that he underwent the application of the detailed Sith tattoos to his entire body.

Darth Mauls primary weapon is a double-bladed Sith Lightsaber. It can be selectively used with only one end ignited. Customized controls increase its lethality and allow each blades length to extend from half a meter to one-and-a-half meters.

This highly-detailed mini bust, based on the original Lucasfilm costumes and props, was sculpted and painted by Gentle Giant Ltd.