THE EVOLUTION OF DARTH VADER 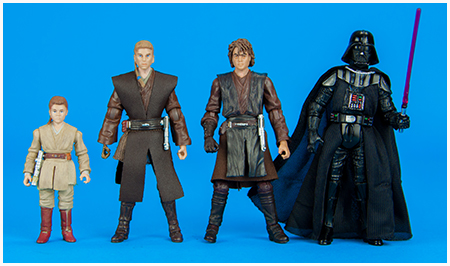 Relive the evolution of Darth Vader from his Jedi beginnings to his fall to the dark side. As a Padawan, young Anakin Skywalker learns the ways of the Force from his master, Obi-Wan Kenobi. During the Clone Wars, he is a Jedi General and hero of the Republic. Then tragedy strikes as he falls to the dark side to become the villainous Sith Lord, Darth Vader. Re-create the exciting adventures and fateful events of this amazing character who changed the destiny of an entire galaxy!

While not on displayed in their showroom, Hasbro revealed The Evolution Of Darth Vader four pack in their press release from the 2013 International Toy Fair. The set, which repacked four figures, set the cinematic timeline from the hopeful Padawan to the Dark Lord of the Sith. This set began shipping the following November.


What's In The Box?
About This Set

« Back To Saga Legends Multipacks