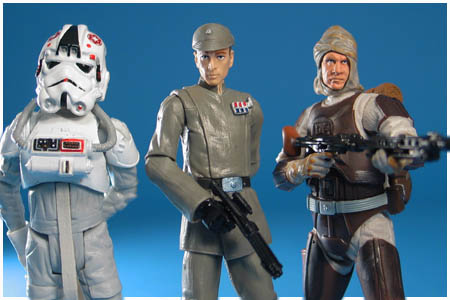 Special Action Figure Set
Some five months after revealing a second wave of Target Exclusive Star Wars Vintage Collection Special Action Figure Set of 3 Packs at the New York Toy Fair in 2011, Hasbro announced at San Diego Comic-Con 2011 that a third wave was to be released. Again giving a nod to sets released in the original vintage line-up by replicating the names and figure combinations, the wave comprised an Android set in Star Wars packaging, while the Imperial Set and somewhat debatable Imperial Forces were packaged under the banner of The Empire Strikes Back. The sets were released soon after being revealed, with a RRP of $19.99.
Dengar (Bounty Hunter)