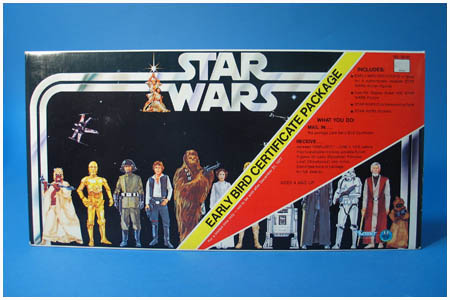 Authentic looking action figures from the smash hit movie
Kenner's action figure line began in the fourth quarter of 1977 with the release of the Early Bird Certificate Package, but not a single action figure saw release in the first year. As the near-legendary tale goes, Kenner was unable to get the toys ready for a Christmas 77 release, and while under the gun grasping for ideas, the toymakers devised the Early Bird, which for all intents and purposes was nothing more than an a promise with a suggested retail price attached. In actuality, the envelope, which included a cardboard backdrop, a little sticker sheet, a club membership card, and most importantly a certificate, which when mailed in would guarantee the sender the first four figures mailed to their house as soon as possible. Holding true to their promise, beginning in February 1978 Kenner shipped off small white mailer boxes containing a white tray holding four bagged action figures including Luke Skywalker, Princess Leia Organa, Artoo-Detoo (R2-D2), and Chewbacca as well as a little bag of twelve foot pegs to accompany the backdrop display stand that came with the certificate.

Though also found on the earliest of carded figures, the vast majority of Early Bird Luke Skywalker figures included what collectors have dubbed as the Double Telescoping Lightsaber (DT). This accessory featured a two-piece shaft that extended to almost two inches, was quickly swapped out in favour of a one-piece accessory. The set also came, primarily, with a green moulded version of Chewbaccas Bowcaster rifle accessory. This version has also been spotted on the first cardbacks but in almost as limited quantities as the Double Telescoping Lightsaber. It is believed that small quantities of the regular one piece Lightsabers and blue/black Bowcasters were packaged in some of the later packed shipping boxes.