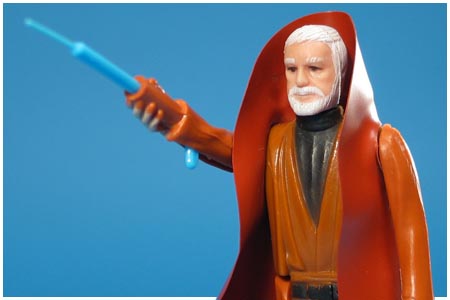 3 3/4" Action Figure
Unlike the myriad sculpts we see in the modern line, there was only one version of Ben (Obi-Wan) Kenobi made in the Kenner line. And even though the figure did end up having a couple of small variations, this was all the original Star Wars Generation needed to have fun during playtime.

This figure first appeared on the Star Wars 12 back card. During the Return Of The Jedi 65 back releases, the image on this figure's card was replaced with a new image. Though known examples indicate that the switch took place during the 65C production run, It is possible that earlier examples could exist. The original photo made its last appearance on the Return Of The Jedi 65C back. Note that the distinction of 65D and 65E cards is the Anakin figure offer stickers, the 65C was the last printed 65 back variation. The new image was used on all other cards after including The Power Of The Force and Tri-Logo cards.