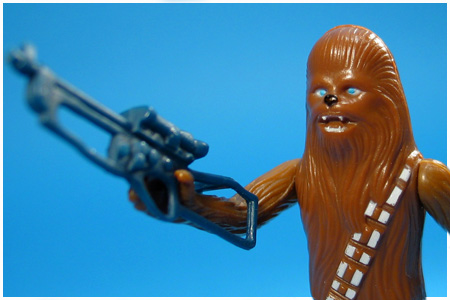 3 3/4" Action Figure
You may not know it by looking at the vintage Kenner Chewbacca, but this bad boy has ripped the arms off of many a figure in his thirty-three year reign of supremacy. Unlike the modern line, todays addition to the Kenner Photo Archive was only available like this. Back in the day, collectors had to use their imaginations to set Old Chewie on a mynock hunt or have him track Probe Droids with his pal on the icy plains of Hoth.

This figure was included in the Early Bird Set, but made its first carded appearance on the Star Wars 12 back card.

During the Return Of The Jedi 65 back releases, the image on this figure's card was replaced with a shot from ROTJ. Though known examples indicate that the switch took place during the 65C production run, It is possible that earlier examples could exist. The original photo made its last appearance on the Return Of The Jedi 65C back. Note that the distinction of 65D and 65E cards is the Anakin figure offer stickers, the 65C was the last printed 65 back variation. The new image was used on all other cards after including The Power Of The Force and Tri-Logo cards.