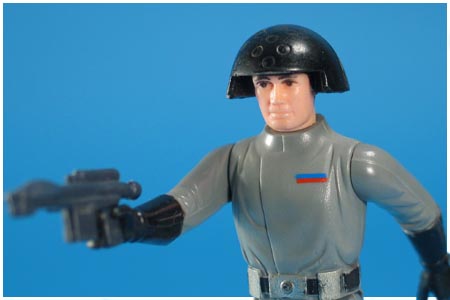 Even though this figure became better known as the Star Destroyer Commander, it was introduced to the Star Wars Generation as Death Squad Commander when it debuted in 1978. It didn't take long for Kenner to reevaluate its macabre name selection and in a truly Orwellian manner 'New Speaked' it to the name 'it always was called'. And they would have gotten away with it too if it werent for this pesky introduction!

As the 'Death Squad Commander', this figure first appeared on the Star Wars 12 back card and was renamed to the more PC 'Star Destroyer Commander' on The Empire Strikes Back 31 back card and has stayed as such on every card printed afterwards. Due to (then) upcoming the name change, The Empire Strikes Back 21 back -with the figure's original name- is considered one of the rarest figure packaging variations and is highly sought after.