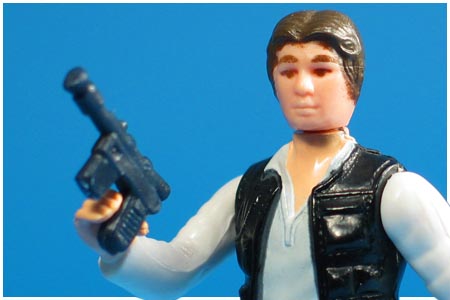 Never has the original Star Wars Generation seen an action figure more in love with its own fame than it did with the original Han Solo action figure. He was so full of himself, his head seemingly grew twice its size. Virtually overnight...

This figure first appeared on the Star Wars 12 back card. During the Return Of The Jedi 65 back releases, the image on this figure's card was replaced with a new image. Though known examples indicate that the switch took place during the 65C production run, It is possible that earlier examples could still turn up. The original photo made its last appearance on the Return Of The Jedi 65B back. Note that the distinction of 65D and 65E cards is the Anakin figure offer stickers, the 65C was the last printed 65 back variation. The new image was used on all other cards after including Tri-Logo card.