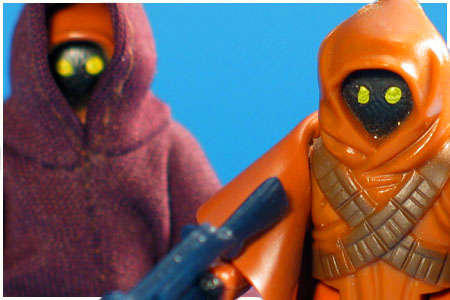 People dig the vintage Jawa figure. They always have, they always will. When Kenner added the insanely cool fabric cloak, young collectors had the added incentive to create their own army, their own Jawa Force if you will. Oddly enough, with all the figure's popularity, it is the little vinyl cape most of us threw out when we were young that makes it such a well-known collectible even outside of the Star Wars collecting community.

Since its debut on the 12BK A card, the Jawa figure has appeared on almost every card back variation, with the notable exception of the Star Wars 21 Backs and The Empire Strikes Back 32 Backs, and was last packaged in the U.S. on The Power Of The Force 92 Back card and the European Tri-Logo card. Of all the card back variations, the Tri-Logo Jawa is one of the toughest figures to find.