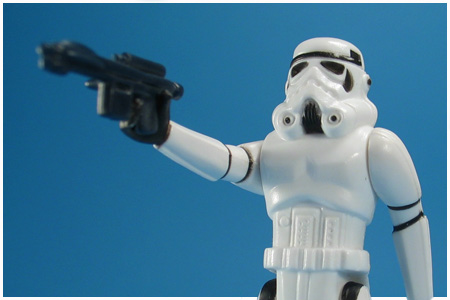 The vintage Stormtrooper is the exact polar opposite of the modern figure. Even though it is actually quite accurate to the film version, it is completely void of any form of action posing points of articulation save for the hips and shoulders. On a positive note, with his moulded head, he had no choice but to stay on target as long as he was facing it directly.

This figure made its first carded appearance on the Star Wars 12 back card in 1978 and carried through on every card back right up and including 1985's The Power Of The Force assortment, at which time it was renamed 'Imperial Stormtrooper'.