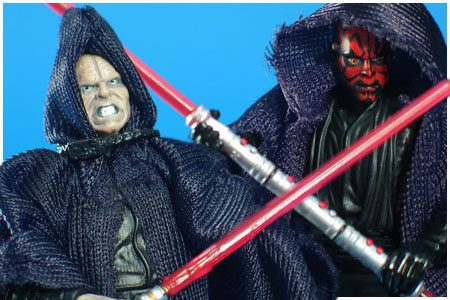 Emergence Of The Sith Two Pack
The Sith emerge from the shadows to begin their assault on the galaxy. The mysterious Darth Sidious sends his deadly apprentice, Darth Maul, to track down Queen Amidala and the Jedi who escaped from the clutches of the Trade Federation forces. The two Sith mark the beginning of the dark times that are coming for this once-peaceful galaxy.

Released early in 2012, the Emergence Of The Sith was released exclusively through Target along side The Rise of Darth Vader. Both two packs featured repackaged figures at a discounted retail price.