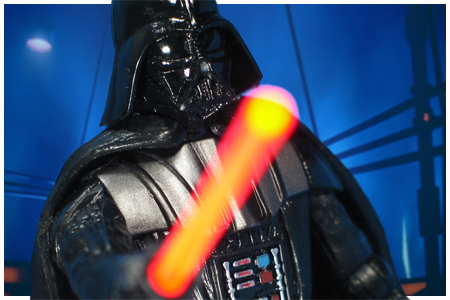 with Light Up Lightsaber
Technically the third wave in Hasbro's Movie Heroes collection, early shipments only included the Light-Up Darth Vader and Snowspeeder Luke Skywalker along with nine previously released figures (The Vader was two per case). Both of these figures began shipping in North America in mid-June 2012. Like all the figures released before this one, the package include a Galactic Battle Game Card, a Game Die, and one of four randomly packed tan Display Stand.