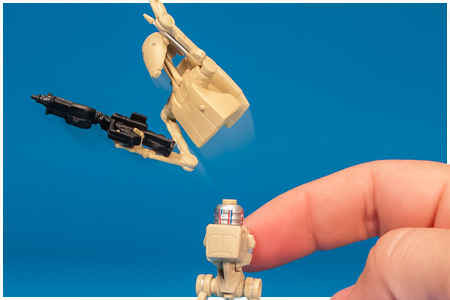 Blast-Apart Action
The MH22 Battle Droid made its first revealed at Celebration VI. The figure features a spring-loaded exploding action that allows your Republic forces to tear through the Separatist army. The action feature projects the droid's upper half quite well, but it gets in the way of the figure's ability to balance well, and the lightest tap causes it to fall apart at the waist.

The last wave of figures in the 2012 Movie Heroes line first showed up in Europe in the fourth quarter. North American collectors kept their hopes up, but as we moved into the new year, it became apparent that this assortment, which included MH19 Anakin Skywalker, MH22 Battle Droid, MH23 Sandtrooper and MH24 Boba Fett, was not going to arrive at the local toy stores.
European Tri-Logo Product Packaging