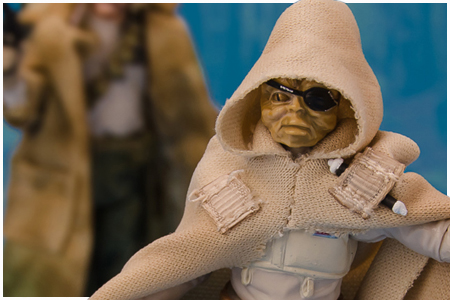 Return of the Jedi
The final wave of The Vintage Collection was released as an online exclusive in November 2012, having originally been revealed at the New York International Toy Fair the previous February. In addition to the Naboo Pilot, Mawhonic, Aurra Sing and Gungan Warrior that were previously released as part of the Walmart exclusive Discover the Force line, the remaining eight figures were all brand-new sculpts and comprised the second and third figures in the realistic Clone Wars style, Ahsoka Tano and Obi-Wan Kenobi, as well as Lumat, Emperor's Royal Guard, Nien Nunb, Weequay and Orrimaarko from Return of the Jedi, and finally, Republic Trooper from The Old Republic.
U.S. Product Packaging