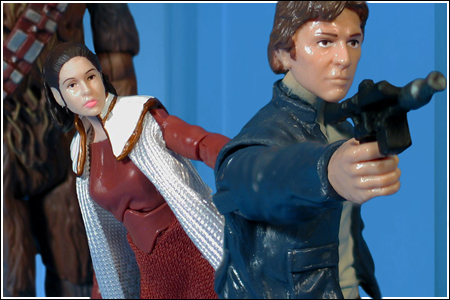 Episode V: The Empire Strikes Back
Harking back to the original Vintage line, with a design that was once considered by Kenner as an alternative to the classic black-and-silver look, the "Lost Line" was first revealed to fans at New York Toy Fair in February 2012 and debuted in the San Diego exclusive Carbonite Freezing Chamber the same year. The first six figures that came in the set, one from each episode of the complete Star Wars saga, were Jar Jar Binks, Clone Trooper Lieutenant, Shock Trooper, Sandtrooper, Princess Leia and Darth Vader.

What is your latest Kenner acquisition?
The Rise of Skywalker - The Emperor Mini Bust
Why was Kenner totally unware of Luke's incorrectly colored yellow lightsaber?
Phoenix Board # 207: BS Rancor, Book of Boba Fett, and more
Rancor - Haslab 2021
Jumar Rebel Base
Imperial Assault Hovertank