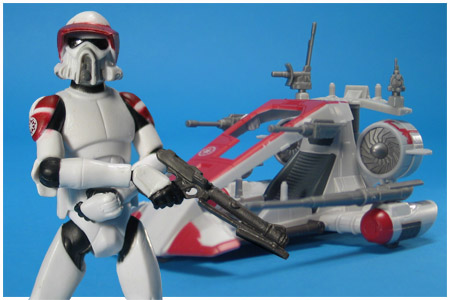 The Clone Wars Class I Vehicles
2011's first two waves of the "Shadows of the Dark Side"-packaged Figure & Vehicle Packs from The Clone Wars were revealed at New York Toy Fair in 2011. Disappointingly, two-thirds of the first wave was cancelled, but the second wave, which featured the Speeder Bike with Castas, Separatist Droid Speeder with Battle Droid and Republic Scout Speeder with ARF Trooper did see release in July 2011, alongside the Attack Cycle with General Grievous from the first wave.