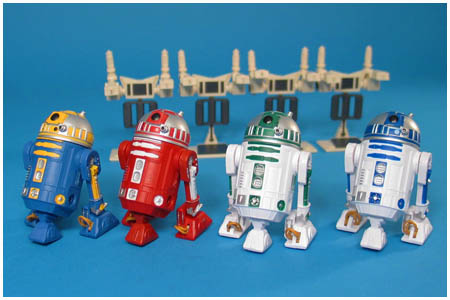 Discover The Force Battle Pack
Collectors love astromech droids, and this has been borne out by the success of Entertainment Earth's astromech droid pack series from The Saga Collection in 2006, which delivered ten droids spread across two sets, 2008's The Legacy Collection which included the build-a-droid bonus feature, and countless further pack-ins in the years that followed. Announced at New York Comic-Con 2011, only two months prior to its scheduled release date of 30th January 2012, the Royal Starship Droids' set of four astromechs from the Walmart exclusive Discover the Force sub-line proved difficult to find, being particularly scarce in Walmart's brick-and-mortar stores and frequently out-of-stock online.

Despite there being a fond affection for astromechs amongst collectors, the build-a-droid molds are not to everyone's liking. That being said, the Royal Starship Droids' set ought to be considered an essential purchase, providing you can get your hands on it, and if you can live with the holes on either side of each droids' body, then you will be rewarded with what is regarded as the definitive sculpt, and a uniform appearance to R2-D2, R2-B1, R2-R9 and R2-N3, the latter seeing its first ever release.

Back To Discover The Force