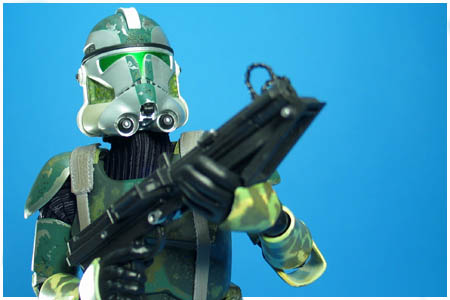 41st Elite Corps 1/6 Scale Figure
Announced on July 12th, 2011, Sideshow Collectibles' Commander Gree 41st Elite Corps 1/6 scale figure went right up for pre-order and began shipping in December, 2011. It came packed with everything you'd expect from one of Sideshow's Clones, and since his character appears in the cartoon, an additional switch-out head sporting the double mohawk seen in The Clone Wars. Like most clones that have come before this, the exclusive version features a unique white display stand.