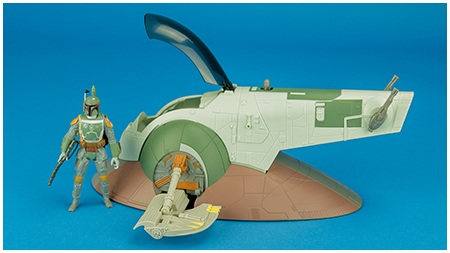 Boba Fett flies his Slave I starfighter to Bespin as he tracks down the Millennium Falcon and a prized bounty: Han Solo. Fett loads the carbonite-frozen Solo onto Slave I, a vessel once used by Jango Fett. The ship is modified with advanced weapons, making it a powerful vessel for capturing bounties and making swift escapes.

The repacked Slave I was released on weeks after the the September 4th, 2015 Force Friday event as part of Hasbro's The Force Awakens vehicle assortment. This vehicle and action figure set was released previously in the 2014 Rebels vehicle collection.

Back To The Force Awakens Vehicles