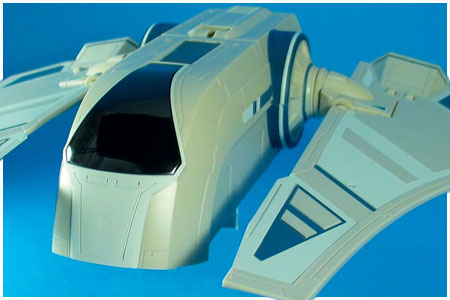 The Clone Wars Class II Vehicles
A single addition to The Clone Wars line in the fourth and final wave of vehicles that featured the "Shadows of the Dark Side" packaging, the highly sought-after Mandalorian Assault Transport was revealed at San Diego Comic-Con in July 2011. It shipped alongside repacks of Anakin Skywalker's Jedi Starfighter and the Republic V-19 Torrent Starfighter, as well as the Separatist Droid Gunship from an earlier wave, and was scheduled to be on-shelf September 2011.